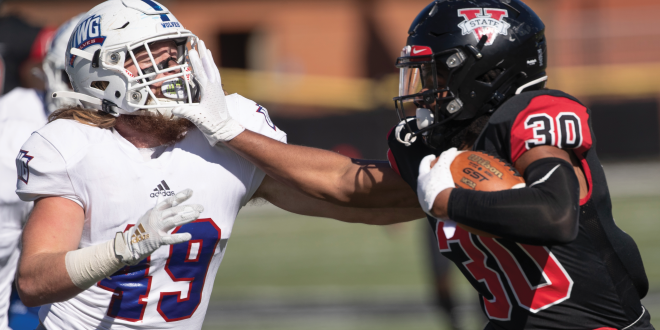 After trading punts to open the game, the Blazers got a fourth down stop in West Georgia territory. Two plays later, junior quarterback Ivory Durham found junior running back Seth McGill for a 17-yard touchdown.

VSU found the end zone again on their next offensive possession, with redshirt junior running back Jamar Thompkins punching it in from five yards out to give the Blazers a 14-0 lead.

West Georgia got on the board on their next possession. Quarterback Harrison Frost threw a strike to wide receiver Phil Patterson for a 63-yard touchdown pass to make the score 14-7.

The game then turned into a field position battle, with the Blazers getting the best of the Wolves after pinning them deep in their own territory. VSU forced a punt from West Georgia’s own end zone and got good field position following a solid return by graduate wide receiver Brian Saunds.

The Blazers took full advantage of the short field, with McGill running it for a 7-yard touchdown. VSU also scored on their next possession as Durham finding senior Lio’undre Gallimore from eight yards out to stretch the lead to 28-7.

The first half ended on a series of scores as West Georgia tried to cut into VSU’s lead. Still, VSU answered the bell with a 4-yard run from Thompkins to take a 35-21 lead into halftime.

VSU began pouring it on in the second half with back-to-back scores.

Durham kept it himself for a 1-yard touchdown run. On VSU’s next drive, Durham found graduate student Victor Talley for a 17-yard touchdown pass to make it 49-21.

Still, West Georgia tried to claw back into the game with back-to-back scores of their own to make the score 49-35. That included a score following an interception by Durham to set up a 15-yard touchdown pass from Frost to wide receiver Mechane Slade.

However, it wasn’t enough to overcome a historic offensive performance by the Blazers.

This was the second time the Blazers faced the Wolves this season. VSU prevailed in a tight game on Oct. 30, holding off a late West Georgia comeback and winning 36-34.

The Blazers controlled the game with a balanced offensive attack, rushing for 365 yards and passing for 354 yards. In addition, the Blazers’ defense was able to shut down the Wolves’ rushing attack, holding them to just 29 yards on 1.4 yards per attempt.

Previous 10 songs to put you in the holiday spirit
Next Spectator Favorites: Thanksgiving Pie Edition