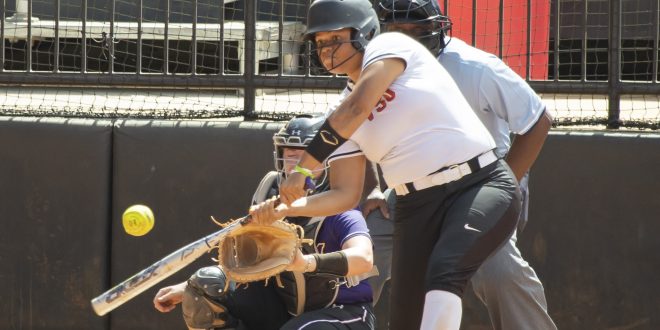 The series sweep continued a trend of dominance in the young series, with the Lady Blazers now having won eight of the past ten matchups and ten of 12 overall.

The Lady Blazers had another complete series performance, getting it done on both sides to take out the Lady Falcons.

The Lady Blazers rode the strength of their bats in the series opener on March 5 to cruise to a 9-2. VSU totaled 13 hits for the game while holding the opposition to just three hits.

Graduate student third basewoman Ally Clegg helped get the scoring started with a single to left field in the bottom of the second inning. This allowed sophomore second basewoman Taylor Macera to reach home base.

Later in the inning, sophomore first basewoman Aniston Gano brought in another run with a single to center field, with redshirt senior left fielder Baylee Everson tacking on another run.

The Lady Blazers doubled their lead in the third inning with a pair of home runs from Macera and junior right fielder Abby Sulte.

Montevallo got on the board in the top of the fourth inning with a two-run homer from Lauren Hamby to draw within two runs.

However, the Lady Blazers had a huge surge in the bottom half of the inning, bringing in four more runs to make it 8-2.

Sulte’s single to center field brought in both Gano and Clegg. Junior catcher Taylor Lewis brought in two more runs with a single to left field, with Sulte and senior shortstop Nikki Pennington reaching home base.

Sulte helped end any hopes of a late rally with a home run in the bottom of the sixth. Along with her two homers, Sulte finished the game with three total runs, four RBIs, and three hits on just four at bats.

Junior pitcher Samantha Richards recorded her tenth win of the season in dominant fashion, recording a season-high 14 strikeouts to help keep the Lady Falcons at bay.

Montevallo’s Hamby got the scoring started in the top of the second inning with a single to right field, which brought in Holly Massey.

VSU’s offense struggled mightily in the first three innings, having just one hit. However, the Lady Blazers’ offense came to life in the fourth and fifth innings.

Lewis’s reach on an error allowed Sulte to reach home base during the bottom of the fourth to put VSU on the board.

The fifth inning saw VSU take the lead off another Montevallo error, this time on a bunt from sophomore pitcher Morgan Hill. The error resulted in junior centerfielder Hunter Meadows getting home.

Hill added another run to the lead following a single from Pennington later in the inning.

From there, Richards, coming in relief for sophomore pitcher Mia DeAngelis, did the rest. Richards struck out seven out of eight batters she faced over the final three innings to seal the deal.

The last game of the series saw VSU having to overcome a slew of errors and a deficit to secure the sweep. The Lady Blazers finished with four errors in Sunday’s game, compared to none for the Lady Falcons, as well as them being down 5-1 at one point.

Montevallo again got on the board first, with Hannah Carey’s double to center field bringing in Taylor Robinson during the first inning.

An error led to the Lady Falcon’s second run of the game, with Sierra Easterwood getting home following a throwing error.

Gano got VSU on the board in the bottom of the third with a home run to right field. However, Montevallo’s Carey answered with a two-run homer in the fifth to put the Lady Falcons up 4-1.

Sydnee Pawlak put Montevallo up 5-1 in the top of the sixth, scoring on a pop fly from Easterwood.

Desperately in need of a run, Lewis delivered with a home run in the bottom of the sixth inning.

VSU’s defense came up big in the seventh inning, limiting Montevallo to just one hit. That defense helped set up a do-or-die situation in the bottom of the seventh.

Gano, Sulte, and Pennington each got on base, with Gano and Pennington being walked. That led to sophomore designated player Katie Proctor smacking a walk-off grand slam to complete the comeback and secure the sweep.

The Lady Blazers have another lengthy road trip ahead of them. They’ll first travel to Jackson, Tennessee, to face Union in a three-game series on March 13-14.

Following that, VSU will be in St. Petersburg, Florida, to face Eckerd College on March 16 for a midweek doubleheader.

Previous ‘The Batman’: 10 Flying Rats out of 10 !
Next Editorial: The good and the bad of VSU’s WiFi networks