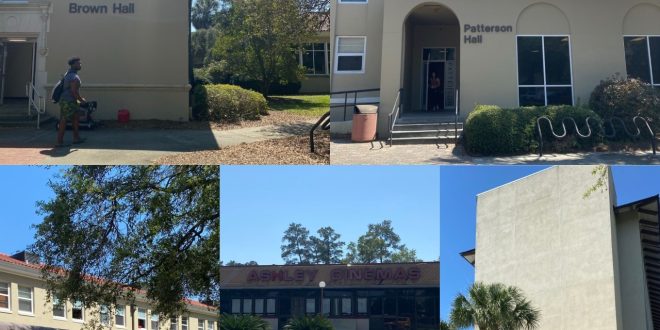 The USG Board of Regents decided against renaming more than 70 building across the university system last semester that are named after those who partook in slavery, oppression, anti-Semitism and supremacy.

Five of these buildings are located on VSU’s campus, including residence halls. They are Ashley Cinema, Brown Hall, Langdale Hall, Lowndes Hall and Patterson Hall.
The buildings are named after these individuals: William Ashley, a physician and slaveholder; Joseph Mackey Brown, a governor of Georgia when VSU’s original school opened; Harley Lang
dale, Jr., owner and operator of the largest naval gum stores in the world; William Jones Lowndes, a South Carolina politician and enslaver; and James W. Patterson, an attorney and Confederate soldier.

The Name Advisory Group who recommended these name changes to the Board of Regents was formed in June 2020, shortly after the national uproar following the murder of George Floyd. They reviewed the names of buildings throughout USG, identifying 878 out of 3,861 building names recommended to be changed.

The Group purposed the Board of Regents to consider changing the name of just over 70 of these buildings.
The recommendation made up a 181-page report, which included the history of each building.

According to the Board of Regents’ statement, the buildings do not represent or reflect the values of USG.

The statement also emphasizes the purpose of history is to instruct and teach important lessons that make Georgia and its people stronger if the lessons from history are understood.

The Board of Regents concluded that they “will not pursue name changes on USG buildings and colleges as recommended by the advisory group’s report. We acknowledge, understand and respect there are many viewpoints on this matter. Going forward, the Board is committed to naming actions that reflect the strength and energy of Georgia’s diversity.”

Dr. Richard Carvajal, VSU’s president, decided not to comment directly, but he said VSU is going to continue its ongoing efforts to build an inclusive campus.

“At Valdosta State University, we appreciate those who have changed the lives of countless students with their support, and we remain committed to treating all students, faculty, staff and alumni with dignity, humanity and respect,” Dr. Carvajal said.

Dr. Carvajal also directed The Spectator to the Board of Regents policy on naming buildings on university campuses.

“The recent naming of the Robert L. Shannon Center for Diversity, Equity and Inclusion is just the first step of a long path toward this mission,” Dr. Carvajal said.

According to the naming policy in USG, the president of a university ensures the proposed naming is in interest of the institution and the USG. The President is authorized to name and to remove names of interior spaces and academic units, such as departments, without prior approval of the Board of Regents.

The names of colleges, facilities and property owned or leased by the USG are required to be proposed to and approved by the USG and Board of Regents. The decision whether to modify or remove a building’s name is the Board’s, in consultation with the Chancellor.

Dr. Thomas Aiello, professor of history, Africana studies and anthrozoology, said he appreciated that the list of buildings did not include only slaveowners but anti-Semitic scapegoating and the use of debt peonage labor prevalent in South Georgia.

He also said he believes the names should be changed but does not believe VSU will take the steps to do so.
“Our university has not, in my time here, demonstrated any real administrative courage when it comes to racial issues, and I wouldn’t expect them to start now,” Dr. Aiello said.

Dr. Aiello said his guess would be that administration ignores the issue and hope that people forget about it.

“It is a shame, considering that our student body is roughly 40% Black, and all of our students deserve to learn in buildings where they don’t have to feel the structure itself is overtly hostile to them, but the school’s high-value donors would take offense at such name changes, as small a gesture as they would be,” Dr. Aiello said. “University administrators often feel they have to let those voices take precedence over their minority students, less out of overt hostility to them and more because those minority groups aren’t reflected in the makeup of the administrative team, and the defunding of higher education at the state level forces public universities more and more to rely on those donors.”

Dr. Aiello says this view forgets that hostility need not be overt to be damaging.

“Our first goal should always be serving our students . . . all of them,” he said. “In particular, those who have the structural odds against them.”

According to Dr. Aiello, any name change would require the same amount of effort that was required for the change of Forrest Street, which included students, professors and alums of VSU.

A campaign would have to take place that demonstrates the names on buildings are a small factor of the much larger issue of systemic racism and inequality, one that ignores historical realities in favor of white feelings, he said.

“It is the same impetus that seeks to remove Black history from textbooks and limit any critical analysis of white behavior in the past,” Dr. Aiello said. “That is the larger problem, one that won’t go away with name changes on buildings. But the name changes would still be a nice start.”

Leigh Ann Overlaur, a sophomore English major, says it’s important for all students to feel inclusive in all residence halls and buildings.

“We’re supposed to learn how to avoid a repeat of our nation’s history,” Overlaur said. “However, how are we going to do that when we walk over the threshold of a building named over past transgressors?”

Amber Velasquez, a sophomore English major, said it’s disappointing and disgusting that these men are honored by VSU.

“Their contributions to the school do not erase the discriminatory views they held, and though some may say, ‘it’s just in the past,’ their mindsets and beliefs led to a suffering that continues to this day,” Velaquez said. “There is no reason that these buildings should continue to be named after such men.”

Tyler Clark, a freshman marketing major, said he doesn’t think buildings on VSU’s campus should be named after racist people.

“I’m not too sure about the legality of changing buildings’ names,” he said.

The Spectator reached out to the Board of Regents’ communications and their associate vice chancellor and were directed towards their public statement.

The Name Advisory Group decided not to comment but directed us to the Board of Regents.

Sandra Jones, director of student diversity and inclusion, did not respond to our request.

The Spectator will be following this story with a summary of the history of the five buildings (Ashley Cinema, Brown Hall, Langdale Hall, Lowndes Hall and Patterson Hall) to provide background of the individuals who are represented by the names of them.