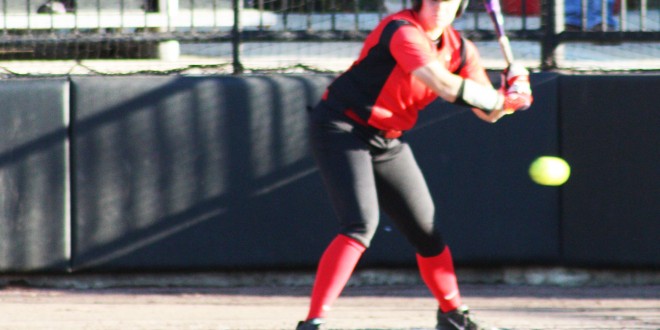 Call it a hot streak for Blazers softball

Call it a hot streak for lady Blazers softball.

No. 2 National Fastpitch Coaches Association-ranked Blazers extend their winning streak to thirteen after defeating Florida Tech Tuesday, in a double header (4-0, 3-2) moving their overall record to 23-2 and conference play stays at 10-1.

Game one
With leadoff batter Courtney Albritton out for six weeks with an ulnar fracture in her right arm, the lady Blazers were still able burn down the Panthers at the Stell’s Diamond field.

With a twist of an arm, pitcher Caitlyn Calhoun managed to get her fourth consecutive shutout to improve her record to 13-1.

After three straight scoreless innings, the Blazers started swinging bats in the fourth to pick up three runs off of two errors made by the Panthers.

Jaime Phillips at leadoff for Albritton started things off by slapping the first hit of the game to third for a leadoff single and advanced to second when a Panther misplayed a sacrifice bunt attempt at third off the bat of Halie Imler.

Both runners moved around the bases when the Panthers catcher rose up from behind the plate to pick Phillips off at second. Fran Johnson fired back one at-bat later with a squeeze bunt to give VSU the lead at 1-0.

Later in the fourth, Heather Robinson came up to the plate to get things done thanks to a two-run single that came with the bases loaded. This clutch at bat brought the Blazers to a 3-0 lead.

Finishing this win off for VSU Kiley Rusen added a run in the sixth inning with a leadoff solo shot to right center field.

Game two
Packing the punch for VSU in the second game was reigning Gulf South Conference Freshman of the Week, Brandy Morgan. A walk-off single in the bottom of the seventh inning made her the hero of this back and forth game between the Blazers and the Panthers.

FT decided to walk batter Johnson and pitch to Morgan who came through with a bases-loaded chopper into the outfield and scored Philips.

Philips, later in the seventh, sparked up the flames for the hot streak Blazers when she managed to get a leadoff walk, before moving up on a bunt single by Imler and a sacrifice bunt by Rusen.

Huntyre Elling twisted up four perfect inning until she allowed the Panthers to take a run and tie the game up 2-2 with back-to-back squeeze bunts in the fifth.

Elling made it to the sixth inning until giving up the job to Maci Fletcher who secured her fourth win of the season against one loss.

Conference plat will return for Blazer softball at the Stell’s Diamond field Saturday with a double-header starting off at 3 p.m. against the University of West Alabama, then again on Sunday to finish up the series at 1 p.m.