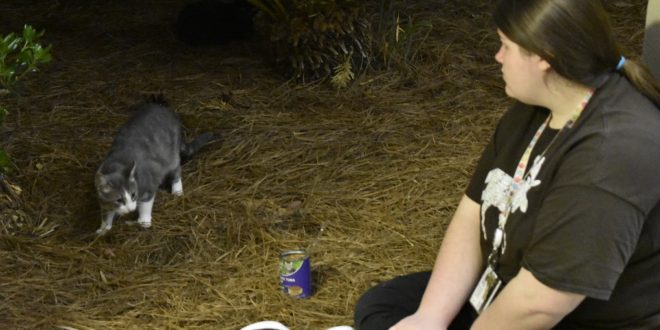 VSU Student Jessica Yeagle tries to win the heart of a stray.

They’re strays. Feral, some would say. They have no companion, friend or owner. No one to tend to them, feed them or give them a name.

Until about nine o’clock each night, when Jessica Yeagle leaves her dorm, headed for her usual spot where the cats are always waiting.

They wait at a place in the middle of campus, where an outdoor light bathes a stucco wall in warm yellow. Every day, thousands of students walk past it. Some will occasionally see a cat, but most won’t. But every night, the cats are there.

Jessica, a self-admitted “cat person,” has taken some pity on VSU’s feline residents. She feeds them, visits with them and keeps account of their well-being. She knows the cats well, aware of their personalities and temperaments. Her routine, completely self-funded, has rewarded her with a familiarity with them that no other student knows. These cats are shy and seldom seen. When they are seen, they’re usually running away. One night, though, Jessica is sitting amongst a half a dozen of them. There’s a half-grown kitten laying across her lap, batting at her fingers with its paws, and another pair of kittens eating just off her hand. A few grown cats linger in the bushes nearby, grooming themselves or watching students walk past where they lay, undetected. The cats are content; the closest thing they have to an owner is here.

We’d met 20 minutes before feeding time to talk about the cats and for me to learn the ropes of feeding and interacting with them. We sat on a bench 50 yards from the feeding spot and spotted several cats making their nightly pilgrimage to the yellow light. The feeding began, as usual, at 9 p.m.

“First things first: Introductions,” Jessica said. Jessica names the cats, though she usually only names them by color, like “Orange Cat” or “Gray Guy.” There’s even a trio of black kittens named “Cat A, Cat B and Cat C.” The cats are remarkably comfortable with Jessica, even if they’re a bit leery of my presence.

Jessica has been a student at VSU for two years. Originally from Snellville, Georgia, in Gwinnett County, she now lives here on campus. She started feeding the first of what would become many cats in September 2017. The first cat she fed was the gray and white male she’s dubbed “Gray Guy”.

“I’ve been feeding them since late September last semester. It started with Gray Guy, then the group went from one to seven,” she said.

The bond with Gray Guy opened the door for the rest of the cats she now feeds.

“I like cats. So it’s like, ‘Let me see if I can get him’,” she said. “After that it was like a friendship. I give him food; he gives me entertainment. It’s pretty cheap entertainment, if you ask me. Fifty cents a day,” she said. She pauses, watching Gray Guy, the cat that started it all, as he bats at a loose needle on a sago palm, and then speaks.

“And I missed my cats back home,” she said.

Jessica isn’t the only member of the VSU community to notice its cats.

Dr. James Loughry is a biology professor here at VSU, teaching upper-level courses on animal behavior. Most of his academic work centers on armadillos, not cats, but he’s certainly noticed the cats at VSU. He started teaching at VSU in 1990, and he says the cats have been here as long as he has. While most of us feel anything from amused to annoyed by them, Dr. Loughry has put some thought into where they

might come from. After all, cats are ubiquitous almost anywhere humans are, but they aren’t exactly native in the same sense as the squirrels and songbirds of South Georgia are. The cats have to come from somewhere, and Dr. Loughry speculates that the area’s most numerous inhabitants are responsible.

“I would be willing to bet that a proportion are released by students after the semester ends,” he said. “It seems like they’re more common around the end of spring semester.”

This begs the question: Are students living near campus packing their diplomas and “Class of” t-shirts and leaving Mittens behind for Maymester? It’s hard to say, but Dr. Loughry surely isn’t ruling out the possibility.

Pets, including cats, rely on humans for food, shelter, and medical care, but cats, when left to fend for themselves, tend to fare pretty well. Cats are capable hunters with a knack for finding shelter in unfamiliar places. The issue often isn’t whether the cats can survive or not, because they usually can. The concern is how they impact the local ecosystem. Dr. Loughry contends that this is the primary concern with cats like these.

“They seem to be doing fine. The big concern would be impact on other animals.” he says. However, when asked how he thought the university should address their presence on campus, he offered the cats some clemency.

“I don’t think they’re so abundant [that they need] to be wiped out. If you can catch them and neuter them, then you should do that,” he said.

Unfortunately, not all cats in the area will meet such a benign fate. Stray cats accounted for 697 or the 2,068 cats impounded at the Lowndes County Animal Shelter in 2017. These stray cats’ chances of avoiding being euthanized aren’t very good. Of all the cats (whether stray, owner-surrender, or seized) brought in or impounded at the shelter last year, only 26.7 percent were met with a live outcome. That means almost 75 percent of the cats were euthanized. These cats are playing a numbers game every day.

The cats’ natural desire to reproduce is the root cause of a lot of the statistics. The TNR or Trap, Neuter, Return method is designed to address that. TNR programs capture cats, have them spayed or neutered, and then return them to where they were originally captured.

The idea behind this method of addressing stray or feral cats is simple: Cats that are captured and sterilized can’t make more cats. Thus, overpopulation issues are avoided, leading to less cats impounded or in shelters. Plus, behavior like fighting, spraying, howling at night – what many consider the worst things about stray cats – is eliminated.

Supporters of the method argue that it’s a far more effective method than widespread attempts at extermination or impoundment. Cats that have been sterilized and released don’t face impoundment, so they won’t be euthanized. Finally, less cats being impounded puts less financial strain on local animal shelters and frees up resources for other endeavors.

The TNR program’s inception was in the late 1960s, first adopted in Ocean County, New Jersey in 1970. In 1989, Stanford University implemented a TNR program on their campus, likely becoming the first college campus to do so. From 2006 to 2007, Alachua County, Florida, saw a reduction in cat

impoundment by 66 percent and a reduction in number of cats euthanized by 95 percent. Today, TNR-style programs can be found in cities across the country, from Baltimore to San Francisco. The idea of such a program reached Jessica through volunteer work she’d done during her freshman year.

“I’d heard about it [TNR programs], and I caught two of them last year – helping a woman with the humane society,” she said.

But in April of 2018, Jessica started catching cats on her own.

The first cat was one she caught with her hands, a near-kitten made tame by so many nights around Jessica and so many bowls of cat food. She took her to a vet and had her spayed.

“This year I saw the kittens. One mom cat had five kittens and some of those were females. I just didn’t want the population to get too big. They live longer lives when they’re neutered, and they’re more friendly,” she said.

After that, Jessica borrowed a small metal cage from a friend and has since caught two more cats. Both she’s taken to local veterinarians to be fixed, then released back near where she caught them.

Back in the same spot she sits every night, Jessica waits on the cats as the day’s shadows grow longer. The cats will be here soon. Gray Guy is already here. Cat A is too, the hair on the back of his legs just now returning from his recent visit to the vet.

Jessica has already opened the cat food container. With summer break around the corner, the cats will have to fend for themselves as Jessica returns home to Snellville. She’s speaks to me, but she’s looking at Gray Guy.

“For the people who think they’re cool and try to take pictures of them and get excited [when they see them]: Keep doing that. If you don’t like them, they’re not going to come and attack you. You don’t have to be mean to them, or yell at them,” she said.

As the sun fades and the lights along the walls of classrooms and dorms turn on, the cats start their night the same way they do every night. Moving towards the middle of campus, towards the same spot, towards the closest thing they have to an owner.

Previous BREAK FREE FROM YOUR PAST AT THE VSU COUNSELING CENTER
Next ‘It’s here for the students’: SGA gives up to $500 to orgs, $150 to students

Some senior athletes have been given one more change to make their mark. The NCAA ...