Women’s soccer coach Melissa Heinz paid tribute to her team’s fighting spirit this past week after the Lady Blazers got back to winning ways, picking up two 1-0 victories against Christian Brothers and Delta State.

After suffering two tough defeats a week earlier in Tampa, Heinz was understandably pleased with the response from her team.

“Anytime you lose a game, you hope your team can be resilient, and be able to bounce back and that’s exactly what we did.” she said.

The first game of the weekend saw the Lady Blazers take on Christian Brothers in a lunchtime kick-off Friday.

A tense game saw the Lady Blazers struggle to turn possession into goals, in a match they dominated from start to finish. An overtime golden goal from inspirational defender Arielle Sabina sealed the victory for VSU.

Sabina was named VSU’s first GSC Defender of the Week for her performance in the two weekend matches. Along with her game winning goal, Sabina led a shutdown defense that only allowed one shot on goal over the course of the two matches.

Following the extra time win Heinz was pleased with the determination shown.

“We’ve never been in overtime, so you never know what your kids are made out of until you go through it,” she said.

“It was pretty impressive. We set out to win early because we didn’t want to have to play another 20 minutes.”

Following that victory, the team then had another fixture against Delta State on Sunday.

The Lady Blazers again dominated proceedings, keeping the ball and amassing plenty of attempts on goal.

Goalkeeper Olivia Mills was rarely tested in the game which looked to be heading for a draw, until Blakely McClellan scored her third goal of the season to finally break the deadlock. The Lady Blazers held on to secure the victory and achieve another undefeated weekend.

The impressive double also meant that the Women’s Soccer Gulf South Conference record stands at 2-0, a statistic that is important to the team.

The weekend marked the start of Gulf South Conference play for VSU which moved to 2-0 in conference play with the two wins. They are now 6-2 overall for the season.

“We’ve got a lot of conference games left and we’ve got to keep progressing,” said Heinz. “Our goal is to reach the Gulf Conference tournament and if we want to go we’ve got to keep winning these games. To get there in the first year would be a very good achievement.”

The Lady Blazers hope to continue their recent run of success and pick up some more wins in GSC matches as they prepare for two away fixtures against Alabama-Huntsville, and West Florida over the weekend. 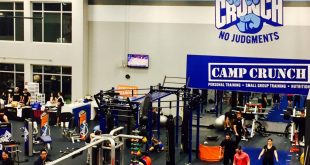 Crunch Fitness set to open up first location in Valdosta