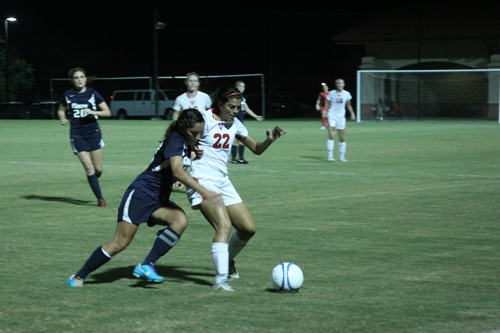 Both VSU and UWG enter today’s game unbeaten in Gulf South Conference games with victories over the same schools.

This looks on paper to be a very even match-up. West Georgia out-scored Delta State and Christian Brothers 3-0, while the Lady Blazers out-scored them 4-2

In those two games, the Blazers put 14 shots on goal.

West Georgia enters today on a 3 game road trip. However, this should not play a factor as they are 2-0 on the road and 0-2 at home in Carrolton.

After playing a hard fought game Sunday vs. Christian Brothers, the Lady Blazers and Coach Melissa Heinz know what it takes to win a tough game.

“We are improving every game,” Coach Heinz said, “Christian Brothers was a great game for us, it was a physical game and the girls did not shy off. It showed us that even if we give up a goal or two, we will still keep fighting and get the win.”

That very well could have been just the type of game the Blazers needed before facing a tough rival.

This team knows it has the talent to go very far, but sometimes talent is not good enough.

All season long they have been working to mesh as a team, and leave each game unsatisfied and ready to work harder.

“What’s impressive is our players are trying to really match their talent with their hard work, and if we can get those on a good balance we are going to be pretty unstoppable,” said Coach Heinz.

With a young team, a lot needs to go right for the Lady Blazers to accomplish the goals they have set.

Give this team experience after every game and a growing level of confidence and watch out. It might be just what they need.