Blazers improve to 4-0 with overtime win over Johnson C. Smith

It took a furious comeback and an extra period to settle it, but Valdosta State prevailed over Johnson C. Smith in a 91-85 overtime win Saturday night.

The Blazers (4-0) trailed by as many as 12 in the second half but timely defensive adjustments by VSU head coach Mike Helfer and shot-making from junior guard Jalen Crawford turned momentum in the Blazers’ favor.

In the overtime period, the Blazers held the Golden Bulls (5-1) to 25 percent shooting and forced four turnovers.

The Blazers’ lone field goal came in spectacular fashion when sophomore guard Blake Justice rose for a three-point shot, double-clutched in mid-air and uncoiled the shot, which found the bottom of the net.

The shot gave the Blazers the lead for rest of the game starting at 84-83 with 3:32 to go in the extra session. The Blazers effectively put the game out-of-reach with their free throw shooting, making seven of eight in overtime.

“[JCSU] was knocking down shots the whole game,” Crawford said. “I know we can score at any time because we’ve got so many players that can get hot. As long as we get stops, I knew we could beat this team or any team we play as long as we play defense.”

Crawford scored 18 of his 27 points in the second half, keying the Blazers’ comeback.

“I don’t want to take away from any of the teams we’ve played but this was probably the biggest challenge we’ve had,” Crawford said. “Johnson C. Smith came in and battled us like no other team has. Tonight, I just saw a fight in our team that we hadn’t seen before. It helped us get the win.”

JCSU led 42-34 at the half behind 18 points from senior forward Robert Williams, who made seven of 10 shots overall and four of seven from three-point range. The Blazers shot 15-of-41 from the floor in the first half, including just three of 15 from beyond the arc.

“Our kids really responded,” Helfer said. “We didn’t shoot it very well in the first half—a lot of credit goes to Johnson C. Smith. I thought we were lucky to just down eight [at halftime] as well as they played that first half.”

“I told our guys at halftime that I thought eight points wasn’t an insurmountable lead so we had to come out and make sure we made some plays and did some different things in the second half. It was a good, gritty, tough win for us,” Helfer added.

A big reason for the Blazers’ offensive struggles was the executed JCSU defensive strategy. The Golden Bulls went to a 2-3 zone, forcing the Blazers to shoot perimeter shots and discouraging dribble penetration.

“[JCSU] plays 2-3 zone all the time,” Helfer said. “It’s kind of the Syracuse theory—they’re very good at it. You think you have open looks, but you don’t. They cover ground fast to get out there and it really affected us in the first half.”

Murray finished with a game-high 14 rebounds, seven of which came on the defensive end. Cook blocked four shots and altered countless others while pulling down seven rebounds of his own.

“Murray’s a phenomenal rebounder because he has a great body, he’s got big hands, he grabs everything,” Helfer said. “I thought Colin did a great job of contesting shots, even though he got some fouls. [JCSU’s] post kid [Emilio Parks] went 2-10 and I thought he did a great job of staying between him and the basket.”

Senior guard Jeremy McKay, making his first start of the season, recorded 13 points (10 in the second half) along with seven rebounds, five assists and five steals.

VSU shot 51.6 percent in the second half and overtime, making 6-12 from three-point range.

JCSU shot 48.4 percent for the game and for a team that came into Saturday’s game shooting just 21.2 percent from long range, they surprised the Blazers by making 11-20 from beyond the arc.

“It did change our game plan,” Helfer admitted. “I give credit to their kids. You can tell they’re a good team. They knew this was a big game and they had kids step up and make shots.Statistically, they had not been shooting it well, but if you went on tonight you’d say they’re capable of making them. They’re a very good team and I’d expect that team to probably be in the NCAA Tournament.”

The Blazers were led in scoring by Crawford’s 27 points. Murray tallied 21, and Justice added 17.

The Blazers will refocus and prepare for their first road trip of the season as they travel to Albany to take on the Albany State Rams (1-2) on Tuesday.

“We were able to beat a really good team [tonight],” Helfer said. “That’s going to hopefully give our guys a little bit of confidence. But come Tuesday night, it’s 0-0 when the clock starts and Albany State is a good rivalry game. We’ve just got to take it one step at a time and not really look at our record at this time of the year. You’ve just got to try to get better.”

Tip-off for Tuesday’s game is scheduled for 7 p.m.

This article was written by Shane Thomas. 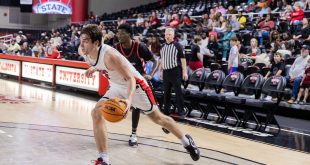