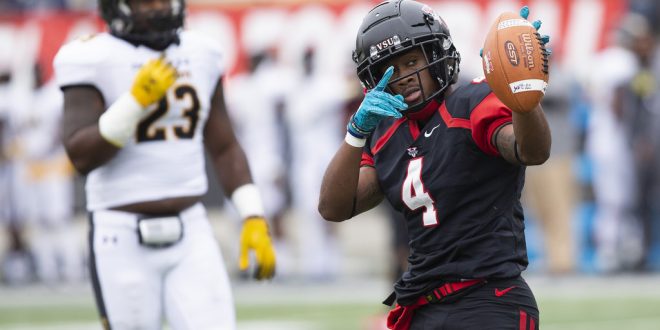 Being the new head coach in title town comes with a set of expectations.

No sleep ‘til Texas.

VSU football is headed to the national championship after winning a 30-24 slugfest against No. 11 Notre Dame College.

I now see why the Falcons of Notre Dame were undefeated coming into this game. They pulled out all the stops to win this game, but still fell short.

Falcons’ Freshman running back Jaleel McLaughlin proved that he will be a problem for Division II defenses for the next three years by rushing for 2,421 yards and 18 touchdowns in his first campaign.

These teams were throwing haymakers and it led to an exciting, but not a high scoring game and it was a character building win for the Blazers.

All season the Blazers have cruised to wins led by their high scoring offense but Saturday they had to rely on their defense.

Jamar Thompkins had a day, zipping through the Falcons’ defense for 145 yards and a touchdown but Thompkins and the Blazers’ offense isn’t the story.

The Black Swarm scored twice from a safety and a 100-yard David Brown interception return.

VSU’s defense only allowed seven points in the second half, which was a given due to Gavin Wilson’s punt being blocked and recovered on the 1-yard line.

Linebackers David Brown and Jameon Gaskin, who have been constants for the Blazers’ defense all season combined for fifteen tackles and 1.5 tackles for loss.

These two players showed that once the going gets tough for the offense, they’re who to call on to make big plays on the field to keep opposing offenses from getting in the endzone.

After finishing 5-4 a season ago, everyone was ready to write the Blazers off prior to the season.

The AFCA Division II Coaches rankings didn’t even feature the Blazers and in the Gulf South Conference the Blazers were ranked fifth.

We all see how that turned out.

The Blazers swept through all competition on the way to a national championship appearance.

Win or lose on Dec. 15 against No. 2 Ferris State, this will go down as one of the most memorable seasons in VSU football history.

We know that the Blazers won’t settle, though. They want the ring.

This is just chapter one of the dynasty that is brewing in Titletown, USA.