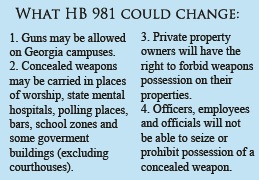 A bill that would allow concealed weapons on Georgia campuses is facing opposition within VSU and beyond.
�
Twenty-three states in America allow campuses to determine their own gun policies. Most states choose not to; however, Utah, Mississippi, Wisconsin and Oregon are the four states that allow guns on campus. Wisconsin prohibits guns from buildings only.

HB 981 is a bill that may allow guns on Georgia campuses if passed.

The bill states that it will allow Georgia campuses “to provide persons holding valid weapons carry license to carry a concealed weapon into certain locations under certain circumstances.”

This bill will allow guns on Georgia campuses; however guns will not be allowed “to enter, occupy, or remain within the state capitol building or any building housing committee offices, committee rooms, or offices of members, officials, or employees of the General Assembly or either house.”

This bill has created much controversy all over the state of Georgia.

VSU’s faculty senate is currently considering a request by professor Michael Noll that it pass a resolution against concealed weapons on our campus.

There is a petition located at signon.org that will be delivered to the Georgia State House and Gov. Nathan Deal if at least 750 people sign it.

Many Valdosta citizens have already signed this petition, including Leigh Touchton, president of the Lowndes/Valdosta NAACP, and Dr. Thomas Hochschild, a sociology professor.

“Gov. Deal, are you prepared to pass back an exam grade of ‘F’ to a stressed out student with a gun,” Hochschild said on the petition. “No? Me neither. I will resign from Valdosta State University immediately if HB 981 passes.”

Touchton was also disturbed.   “As a professor, I now have to sit down with students carrying concealed handguns when they come in irate about a grade,” Touchton said. “This is crazy.

Along with professors, most students will have the same anxiety of always feeling threatened if HB 981 is passed.”

Students have also given negative reactions to the bill.

“I will not attend school if this bill is passed,”  Necoyiah Swain, a sophomore, said.

The bill is not without its supporters though.

Robert Eagar, leader of Georgia Tech’s chapter of Students for Concealed Carry on Campus (SCC), believes that people should have the right to protect themselves at all times.

“Individuals should have the same right to protect themselves on campus as they do off campus,” Eagar said in an article published in the Atlanta Journal Constitution on Feb. 16.

Students for Concealed Carry has many chapters located on university campuses across the country all with the aim to raise awareness for bills like HB 981.

Seventeen colleges in Georgia alone house chapters of the organization.

Starting on Monday, SCC chapters across the nation will hold empty holster protests on campus where participants will wear empty holsters in plain sight and hand out pamphlets and flyers to raise awareness for their cause.

The protests are scheduled to last from April 2 to April 6.

The VSU Faculty Senate will hold its next open meeting on April 19 where the resolution will be considered.

Previous PeoplePoll: Do you think the Slut Walk will be a good way to prevent sexual harassment?
Next Posey continues to hold the torch for VSU