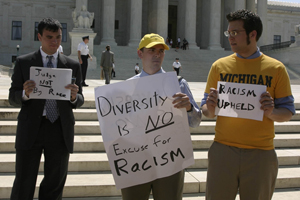 Affirmative action started during the Civil Rights Movement, and was created to initiate and encourage equality in the both the workplace and school systems for all minorities.

Recently, affirmative action has gotten the University of Texas and the University of Michigan into trouble. In both universities’ cases, they used race as an incentive to fill freshman positions with minorities (which was obvious on the application.)

This is both unequal and discriminatory.  After all, aren’t colleges supposed to look at academic earnings and qualifications instead of race?

Grutter vs. Bollinger, a Supreme Court decision in 2003 that urged colleges and universities to have a diverse student body, is the reason why university systems are under fire for discrimination to majority applicants.

Affirmative action tries to solve racism by allowing minority students into their institutions, creating a diverse student body, but overlook academic accomplishments achieved by all races– not just minorities.

Changes need to take place, and the Supreme Court should re-think its decision.  The university systems should be based on the achievements of students on a scholarly basis instead of race–just as the workforce employment should employ people based on their qualifications.

If anything, the box to choose your race should not be on college applications. Instead, if accepted into the university, students should then have the opportunity to take a survey on their racial status. This way, universities can receive statistical data showing diversity in an honest way.

With affirmative action in place, racism, both as a minority and majority situation will continue to exist. By diminishing affirmative action, it will get states’ attention on the educational system in neighborhoods that need to reach standards that would allow all students to reach higher education.

The proposal, which bans any preferential treatment on the basis of race, color, gender or religion, became law in Michigan in 2006.

Many argue that this proposal is a repeal of the Civil Rights Act of 1964, and an indirect means of ending what is known as affirmative action.

I think that affirmative action should remain just like it is.

Though the majority of society may refuse to admit it, the world is full of racism and discrimination.  A person does not have to look anywhere beyond Valdosta to see this.

Race and gender have always influenced decisions at colleges and businesses in our country.  If they didn’t, we wouldn’t have a need for affirmative action in the first place.

This poses a question: How does one institute “alternatives” to affirmative action?  If other methods are implemented for the same purpose, then why not just keep the method that is already enacted?

I agree that it is wrong to accept someone who is not as qualified for a position just to show sympathy because of their skin color, gender, or religion.

Let’s keep in mind, however, that this is not the basis of affirmative action.

Affirmative action is not an excuse to select someone of lesser ability simply because of their race.  What it does is ensures that, no matter where you come from, you have a chance.  If you do the same work, you should reap the same reward.

A person’s race, gender or religious beliefs have absolutely nothing to do with their ability to learn or perform.  They are, however, barriers that have been used to prevent certain people from being able to show these talents to the world.

Affirmative action gets your foot in the door.  What you do once you arrive is up to you.