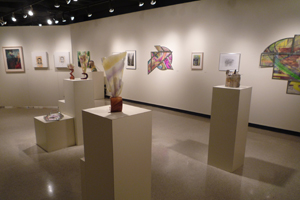 There’s an old saying, “those who cannot do, teach.” Clearly, whoever believes that notion has not been to the 2013 Faculty Art Exhibition.

This mixed media exhibition features works from VSU art department faculty members and has everything from sculpture to animation. The exhibit will be available for viewers at no cost in the Fine Arts building until Sept. 6.

“This is the show where the faculty demonstrates to students that we practice what we preach,” Julie Bowland, Fine Arts Gallery director and art professor, said.

“The star of the show this year has been Mark Stafford,” Bowland said.

Mark Stafford is one of the three new art department faculty members.

His featured piece, “Pity,” is a funky ceramic bust of Mr. T, from the A-Team television series. The bust has a nebulizer in it that makes steam come out of the nose.

Stafford said he selected Mr. T because of his appearance and his B-list celebrity status.

“Mr. T is in his later stage in life and has become a caricature of himself,” Mark Stafford, art instructor, said.

Dr. Cindy Hasio and Abigail Heuss are the other new additions to VSU’s art department.