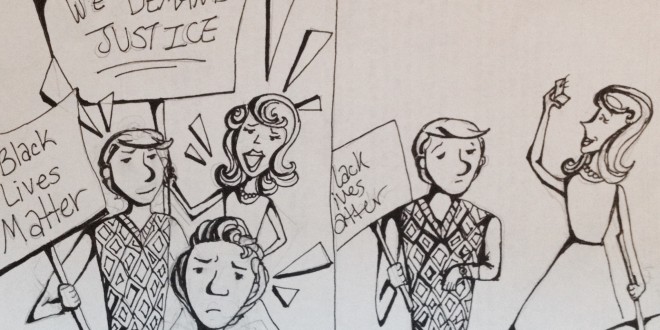 This month there have been many different events catering to the black community here on campus, such as the “What is Black?” photo exhibit, various cookouts, movie nights showcasing black media, peace rallies, forums on knowing your rights and many others.

As February comes to a close, we can’t help but wonder if all of these wonderful events will continue.

We can’t help but question where all these events were the other eight months of the academic school year? First semester there were a few events, such as “We Too Sing Amerika” about police brutality and Ferguson put together by the Kappas. We also can’t forget the vigil for Mike Brown and the MLK march that happened shortly before black history month.

These were all great event ideas and quite a few people showed up to them. It just seems that the black leaders on this campus wait until a holiday or for something terrible to happen to begin action.

It seems as though these same leaders pick and choose what events to put emphasis on. People worked hard and diligently to put on the homecoming step show, and even got a celebrity, Angela Simmons, to host it. The show was a great success, and the whole PE Complex was packed out. Everyone you looked there was promotion for this event and there were lots of organizations involved.

On the contrary, when the non-indicting of Officer Darren Wilson occurred during Christmas break, it seemed like all of the black organizations were going to come together and put together a tremendous event to honor Mike Brown.

Disappointingly, we returned back to school to a 15-minute candle light vigil where there was one speaker and a singer. It was hard to hear the speakers because of the audio difficulties and shockingly roughly 50 people showed up. There was little to no promotion and it just didn’t seem to be an event that was important enough to put a lot of effort into.

This has happened more than once.

Even with the few forums thrown by black organizations, it usually is a smaller crowd and not well prepared.

This month has shown all of the potential the black leaders on this campus have. These marvelous events were clearly well thought out and planned. We are very pleased to see all of the great events that have taken place, and are proud to know that our peers were behind it.

It would be even more pleasing to see these same type of events continue consistently throughout the school year, not just in February.

Black history happens everyday, not just 28 days out of the year. It is important for people to know, respect and appreciate what the black leaders of the past did for not only minorities, but for all Americans.