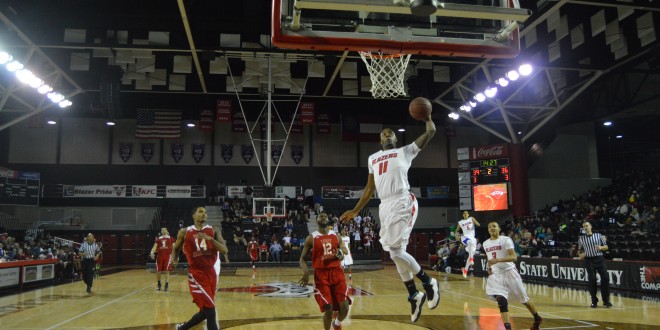 Ending on a high note: Blazers look to future after rough season ends

by Shane Thomas
Better late than never, but never late is better.

That was the will and testament for the VSU men’s basketball team last Saturday night.

A team on a nine-game losing streak lifted itself from the canvas once more to provide a most memorable finale.

The Blazers drilled a school-record 21 three-pointers in a 114-95 win over the University of West Florida. It was a perfect storm of sorts as the Blazers played their best offensive game of the season in front of their biggest crowd of the season (2,214).

The win capped the Blazers’ season with a 10-18 record, 5-17 in Gulf South Conference play. For head coach Mike Helfer, this season was the worst of his 18-year career.

Against UWF, it was a throwback to the glory days of Blazer basketball. The offense came fast and furious, the ball hopped around the perimeter –all accompanied by the roar of The Complex faithful’s.

For the first time all season, the Blazers brandished their full potential, leaving many to wonder the whereabouts of that energy, purpose and urgency over the last 27 games.

“You hate to say it, but we’re looking forward to next year,” junior guard Blake Justice said after the game.

“We know who’s coming back so we’ll build chemistry and be around each other. Hopefully this is the type of game that carries us over to next season.”

Undone by slow starts, close losses and an inability to do the little things to win games consistently, the Blazers should treat the 2014-15 campaign as a valuable lesson learned.

They struggled to develop a strike-first mentality, as their 3-12 record when trailing at halftime indicates. Coincidentally, the Blazers were 7-6 when tied or leading at halftime.

In addition to slow starts, a maddening part of their downfall was their 5-6 record in games decided by six points or fewer.

The Blazers’ performance in those 11 games was a major reason they didn’t punch their ticket to Birmingham, Alabama, for the GSC tournament.

Wisdom has it that the whole is greater than its parts.

The 2014-15 Blazers looked to be so wise when they started 5-1. They had talented pieces, but the losses mounted quickly in conference play.

Chemistry was not the issue The Blazers acted like a family. What the team lacked glue-guys.

Glue binds elements together and resists separation. Having players that accent and unify each other’s skill sets creates a very good team.

Michael Jordan had Scottie Pippen, but he also had Dennis Rodman, Ron Harper, Steve Kerr and Luc Longley. Players lacking star-power with one or two specialties serving as the glue to solidify the team.

The Blazers relied on James Spencer and Justice as go-to guys. Eventually, teams moved Spencer out of his sweet spots and crowded Justice to get the ball out of his hands. Unfortunately, the Blazers’ shooting was lukewarm to ice cold most of the season.

The swarming defense the Blazers relied on early fell by the wayside as their shot-making went astray. Teams took advantage of them on the glass and as Colin Cook said following an 85-83 loss to West Georgia on Feb. 21, did the little things better as the season wore on.

For the second straight year, the Blazers were awful on the road. The Blazers have lost 19 of 24 road games dating back to 2013-14.

Winning on the road comes down to shot-making and being able to do the little things—diving for loose balls, digging out rebounds, taking care of the ball.

The road struggles should come as no surprise considering the Blazers were outrebounded 20 times this season and won just six of those games. The Blazers also coughed up the ball at a high rate, finishing the year with more turnovers than assists.

It did the Blazers no favors to run into the buzz saw known as the GSC. Seven teams posted winning records in-conference. West Georgia, Alabama-Huntsville, West Alabama, Union and Shorter all won at least 18 games this season. The young Blazers simply lacked the experience to overcome.

After wholesale roster changes over the past three years, Helfer and his staff assembled a younger team in hopes of building a sustainable foundation for its future.

There were diamonds in the midst of the Blazers’ rough season.

James Spencer was a model of consistency with his bull in a China shop offensive game and hard-nosed rebounding. The senior from Chicago averaged 13.8 points and 7.4 rebounds; both team-bests.

Colin Cook raised his level of play offensively, posting career-highs in points per game (10.6) and rebounds (6.2) while leading the GSC in blocks per game for the second straight season.

Jeremiah Hill and Josh Lemons showed the ability to score and defend at a high level. Hill and Lemons both ranked in the top-10 in steals in their first season with the Blazers.

With German big man Nils Dejworek as the only size left, the Blazers will need to add rebounding and rim protection in the offseason.

Dejworek, a skilled, 6-foot-10 forward, is more of a perimeter player than a traditional big. With his 11 points and three three-pointers against UWF, Dejworek’s unique skill set displayed the kind of player he can be moving forward.

The Blazers will also have red-shirt junior guard Chris Longoria in the fold next season. The 6-foot-4 transfer from Samford University is a dynamic, aggressive scoring guard with playmaking ability. Longoria and Justice should provide solid leadership next season.

“I like our returning guys,” Helfer said. “We’re going to have to put some pieces in there but I’m looking forward to it. We have to turn the page quick—you want to leave this season behind and look toward the ‘15-‘16 season.”

A 10-18 season certainly frustrated the players and coaches, but that frustration was palpable with the fan base. Average attendance dropped by from 1,132 to 792 this season.

The famous quote from “Field of Dreams” comes to mind: “If you build it, they will come.”

For the Blazers, the little things are a great place to start.