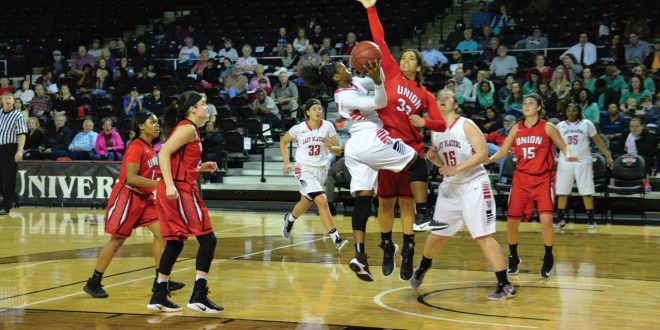 VSU Women streaking through the GSC

VSU Women’s Basketball has first place in their sights after reeling off six straight wins.

The first season of Head Coach Carley Kuhns’ career has not always been fun. Kuhns became coach in June and did not recruit any of her players. She had to learn about the different personalities of her players and figure out how to reach out to each of them.

Nearly eight months later, she has led the team to their first winning season in three years.

One of those personalities, Sonya Franklin, said she is starting to enjoy playing with her teammates more. Franklin leads the Blazers in assists this season with 76, and she is tied for first in steals with 30.

“It’s getting a lot easier,” Franklin said. “At the beginning of the year, we knew nothing about each other, but we’ve grown a lot since then.”

Her teammate, Kenya Samone’ Dixon, is leading the Gulf South Conference in three-point field goal percentage. Samone’ Dixon attributes the team’s recent success to them having fun on the court.

“It’s a lot easier [now], and it’s fun,” Samone’ Dixon said. “It’s easy to go out there and play with people that you really love and know they’re going to give it their all every time. You know they have your back regardless.”

Kuhns had the chance to witness this team’s progress from the start, and she said she can see that her players are now having fun.

“We wanted to be playing our best basketball in February, and we’re getting closer and closer to putting together a full game,” Kuhns said. “It’s been fun to watch, the team is having fun, we’re having fun and we’re trying to put our best product on the floor.”

Kuhns said she thinks the team mirrors her personality in a way, which explains why the team is relaxed and able to have fun together.

Through the consistency and proper preparation, Kuhns said her players can enjoy the game even during crucial situations.

“Being prepared allows you to have fun because there is nothing better than knowing what a team is going to run and being able to stop it,” Kuhns said.

The Blazers have started to click on all cylinders, and they are storming towards not only the GSC tournament but also the Division II National Championship Tournament. Kuhns said thoughts of postseason play are creeping into her mind.

“I don’t think any of us expected to be in this position right now, but we are,” Kuhns said. “We aren’t only playing for a GSC berth, but we’re playing for a NCAA berth. Every game from here on matters.”

The Blazers are currently in second place in the GSC. The top seeded West Florida Argos own the tie-breaker with them, but Kuhns said she would love to play them again and have the opportunity to beat them.

The Argos have won eight of their last 10 games. If both teams win out, they will be the one and two seeds in the GSC tournament.

The Blazers will take on Alabama-Huntsville tonight in Huntsville, Alabama. The Chargers have been eliminated from postseason contention with a 4-14 conference record. The game will start at 6 p.m.