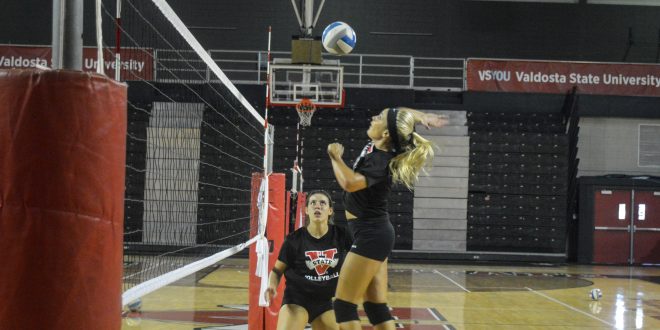 Despite the rough season last year, Blazer Volleyball is predicted to finish fourth in the GSC which would result in a conference tournament berth.

Coming off a mediocre season, the Blazer Volleyball team hopes to dig deep this time around.

Last season, the Blazers were below .500 with a 13-18 overall record. They went 9-11 in conference competition which resulted in them placing sixth in the conference. That record and corresponding ranking resulted in them facing North Alabama, who eventually went on to win the Gulf South Conference tournament.

Head coach Mike Swan has more than 30 years of coaching experience and  600 wins as a head coach under his belt. This offseason he was committed to making sure his players are fit for top performance.

“We are just trying to get everyone in good shape,” Swan said. “We had a few shoulder surgeries over the summer, so this has been us trying to get them back in. I think that we have improved a lot in the last week. We have some good depth at every position, so I’m encouraged.”

This team has the pieces to make a championship run. They are returning six players, and they have six new players as well. Those players are a mix of upperclassmen, junior college players and returning players on the team. According to Swan, the dynamics of the squad gives them an edge.

“We are going to be looking to our upperclassmen to lead us, but it’s an opportunity for many to be impact players,” Swan said.

Tristyn Sells and Sydney Chick are the only two seniors on the squad. The newer players will look to them for their experience. Meanwhile, the pair hopes to lead by example.

“One of the goals we set for ourselves is to be winners at home and do the best on the road,” Chick said. They also want to “stay in the top five in the conference, make it to the conference tournament and keep working hard.”

The Blazers didn’t fare well on the road, putting up a 3-10 record away from the P. E. Complex. Winning on the road will be major step to being successful in the conference. If they have title aspirations, they will most likely have to go through the two-time defending champions, North Alabama.

In a preseason poll, VSU was picked to finish fourth behind North Alabama, West Florida and Shorter in the GSC. To Sells, that’s adding fuel to their fire.

“We were voted to be fourth for this upcoming season which is really good,” Sells said. “I still think people are underestimating us, but that will be beneficial to us in the end. I think we have really strong players, so I believe we are going to do very well this season.”