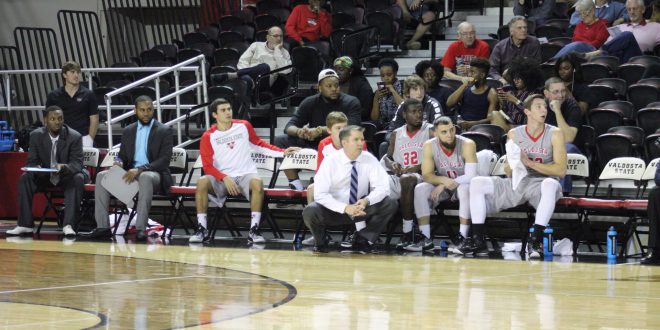 Blazer Basketball looks poised to pick up where they left off last year, the most successful season in collective Men’s and Women’s basketball history at VSU.

The Men’s team compiled a record of 27-6 and won the regular season Gulf South Conference title. Head coach Mike Helfer was voted as GSC Coach of the Year and Jerimiah Hill was selected as the conference player of the year, in addition to a host of other awards.

On the Women’s side, the Blazers were led by first year head coach, Carley Kuhns. Kuhns coached the Blazers to a 22-10 regular season record and the first conference title since 1984.

In the GSC preseason coaches’ poll, both Blazer teams received favorable votes and were selected to finish high in the conference.

The Men’s basketball team was selected to finish second in the conference. The expectation around the conference is high for the Blazers. They will have big shoes to fill after losing seven seniors including Hill.

In addition to the honor that the team received, Beau Justice was selected as a preseason all-conference member. In his sophomore campaign, the Ohio native averaged 14.3 points per game. He was third in the conference for 3pt field goals with 87. Justice is the only starter returning for the Blazers.

The Women’s team was selected to finish first in the conference, narrowly beating out West Florida for the top spot. The Lady Blazers are returning all of their starters and enjoy the fruits of having Kuhns’ first recruiting class joining the team.

Two Lady Blazers were selected to the preseason all-conference team. Madi Mitchell and Kenya Samone’ Dixon both were given the honor in hind sight of their first team all-conference selections last season. Mitchell was the Blazer’s anchor averaging 16.6 points and 8.5 rebounds per game. Samone’ Dixon placed was one of the top 20 distance shooters in the nation, averaging 41.7 percent from beyond the arc.

These polls are just a pulse of the conference, it will be on each team to rise to expectations or not. Both teams will officially begin their practices on Sunday.