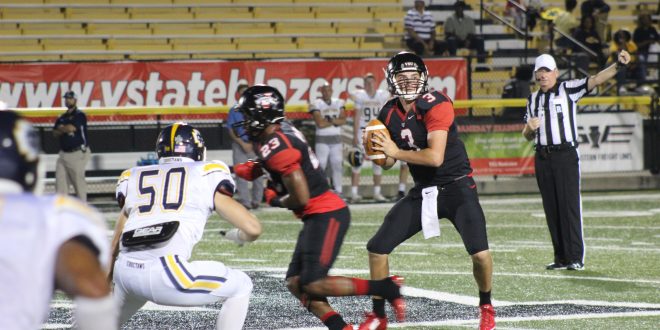 Rogan Wells drops back to pass during Sarturday's 55-3 win over Mississippi College.

The Blazers dominated in a must win game at home against the Mississippi College Choctaws Saturday night. The 55-3 blowout win puts the Blazers at 2-3 on the season and 2-2 in GSC play.

It wasn’t much of a game against the now 0-7 Choctaws, but the Blazers needed the win. The team can take a lot away from the game as they consistently fired on all cylinders.

Valdosta almost had 500 total offensive yards, with no turnovers and finally cut down on the penalties with just four fouls in the game.

“If we put four more of these together, we can go where we wanted,” head coach Kerwin Bell said. “That’s winning the last five and I believe if we do that, we’ll make the playoffs. We got some good, young, talented players that are starting to grow up. This is a good confidence builder, now we got to go on the road against a really good football team, but this is something we needed at home.”

This younger Blazers played a large role on the offensive end. Quarterback Rogan Wells threw for 158 yards and 3 touchdowns and ran for another touchdown.

The Black Swarm defense stood tall once again. They only allowed the Choctaws to gain 231 total offensive yards, with 3 yards per carry and didn’t give up a touchdown. The Blazers continued to keep up their turnover trend with two interceptions and a fumble recovery.

The man in the middle, linebacker Malik Slater, had 9 tackles against the Choctaws and continues to lead the conference in tackles per game with 9.4.

Next week the Blazers will have a huge matchup on the road in Cleveland, Mississippi, against Delta State.

The Statesmen are 6-1 on the season and 4-1 in the conference, while ranked No.21 in the national rankings.

As for now, the Blazers can’t afford to bask in this win. Delta provides another opportunity at a statement win.

Handing them a loss on their turf will send ripples through the Gulf South Conference.