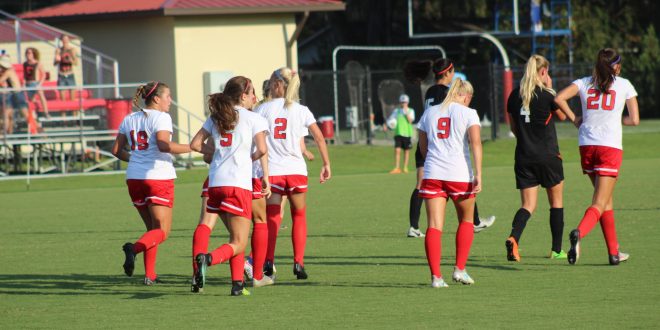 Blazer soccer will enter the Gulf South Conference tournament as the No. 5 seed. They await announcement of their opponent for the Oct. 31 matchup.

Navigating the conference championship won’t be easy, but Blazer Soccer is still miles ahead of where they were last year.

The 2016 season was not very nice for the Blazers. The team finished the season with a 1-11-5 record, having its only win against Delta State.

Offensively, the team struggled greatly, scoring only 12 goals with just six assists in the entire season.

The Blazers ended last season ranked as the No. 10 team in the Gulf South Conference and completely missed the playoffs. Defeating Spring Hill and Shorter and two-win Delta State saved the Blazers from last place in the conference. Delta State ended the season below VSU because VSU tied five of its opponents.

VSU needed a change at the helm. Rebecca Nolin, the Blazers’ previous coach, resigned at the end of the season. The team inserted Stephen Andrew as the new head women’s soccer coach.

Andrew brought his winning pedigree and attacking philosophy to VSU, completely changing the culture of the program.

The Falkirk, Scotland native began his U.S. coaching career at Huntingdon College in 2007 and immediately led the Hawks to the Great South Athletic All-Conference quarterfinals. The success then transitioned to Piedmont, where Andrew notched 136 wins against just 42 losses and eight ties.

Andrew’s ideologies of winning have certainly consumed the players, as he illustrated a huge turnaround season.

The Blazers hold a 10-5-2 record for the season, ranking the squad No. 5 in the GSC standings.

The Blazers will begin conference tournament play on Oct. 31 at the home field of the No. 4 seeded team in the GSC. The conference has not yet determined who that team will be.

There is no doubt that the team is sitting in a good spot, considering the offensive juggernaut mentality that the players have.

Forward Taylor Snell has placed the ball exactly where it needs to be the entire season. Snell currently ranks No. 2 in the conference in goals with 11 and No. 4 in points with 24.

“I just want to help my team win games any way I can,” Snell said.

Though the Blazers are goal-getters, setting teammates up for them has not been an issue either.

Mid-fielder Mallory McDaniel leads the GSC with nine total assists for the season.

“I enjoy putting my teammates in position to attack the goals,” McDaniel said.

All the players have adopted Andrew’s philosophy and now, they are looking forward to the playoffs.

Their upcoming opponent hasn’t been announced yet, but it hasn’t stopped the Blazers from preparation.

“We are just trying to keep everyone healthy and take practices slowly,” Andrew said.