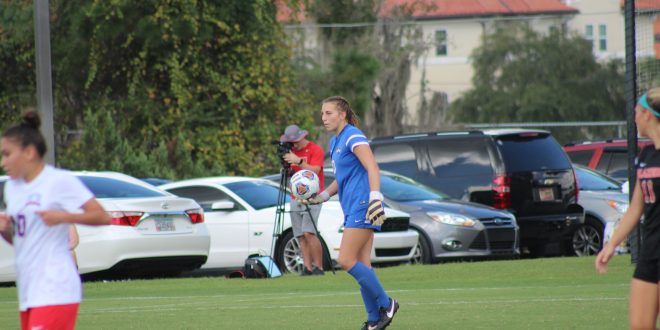 Blazer soccer punched its ticket to the conference final four on Tuesday night. They'll face Lee on Friday in Birmingham for a chance to move on to the championship round.

The Blazers women’s soccer team notched a win in the quarterfinal round of the Gulf South Conference Tournament and will now continue their quest to the championship.

On Tuesday, Oct. 31, the Blazers faced No. 22-ranked North Alabama in a wire-to-wire matchup in Florence, Alabama. The game came down to penalty kicks, and the Blazers didn’t prevail until the eighth round. Just to get to the penalty-kick phase, the Blazers had to overcome a 3-1 deficit in the final six minutes of regulation play.

In the 84th minute of the contest, the season seemed like it was over for the Blazers, down two with time running out.

One of the Blazers leading offensive weapons, Ashley Lewis, put one in the net, cutting the lead to just 3-2. The goal placed Lewis No. 7 in goals in the GSC with nine, trailing two of her teammates, Taylor Snell and Riley Tennant.

Minutes later, midfielder Carley Montgomery came through in the clutch with a game-tying goal. This goal marked her first of the season and sent the game into overtime.

“I’m really thankful that I had the opportunity to finish the shot that kept us in the game because these girls have worked their butts off this whole season,” Montgomery said to VSU Athletics.

The matchup came down to two overtime periods. The defensive effort by both teams were put on display, leaving the game to be decided by a series of penalty kicks.

Senior goalkeeper Alyssa Curtis delivered a much-needed save, which kept the Blazers alive going into the third round. The offensive ability of both squads began to intensify during the third round of penalty kicks.

The tit-for-tat affair kept for five rounds, as both squads scored goal after goal, displaying their will to keep fighting until the end.

Savolainen punched the Blazers ticket into the next round of tourney play with a crucial score in the eighth round of penalty kicks. The Blazers were immediately in celebration mode once UNA defender Mary Margaret Borden’s goal attempt failed, missing high.

The Lion dominated early. They scored first, then Savolainen scored the first goal for the Blazers from an assist from Mallory McDaniel.  With that assist, McDaniel tallied her tenth of the season, keeping her No. 1 in total assists in the GSC.

The Lions took a 3-1 lead after converting two penalty kicks, within a seven-minute period.

The win capped a tremendous week for the team. On Monday, Head Coach Stephen Andrew was named the GSC Coach of the Year. That good news was followed closely by Tuesday’s thrilling victory, Andrew’s first playoff win as a Blazer.

Also, the game marked his first-ever win on penalty kicks during his head coaching career at the collegiate level.

“They bought in from day one after I took over, and to go on the road and get a win over this very good North Alabama team is a great accomplishment for our girls,” Andrew said to VSU Athletics.

The Blazers will take on Lee University in the semifinals of the tournament on Friday, Nov. 3 at Emory Folmar Complex in Montgomery, Ala.  The next game gets underway at 8:30 p.m.

“This win is well deserved, and I want to celebrate with them and keep it rolling,” Montgomery said.