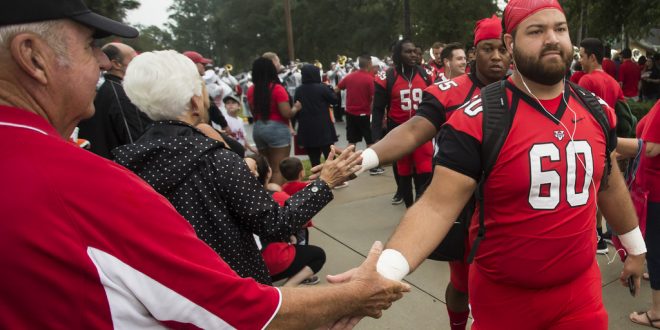 VSU Athletics had many ups and downs in the fall semester.

The first semester of sports from the 2017-2018 season is nearly over and it didn’t disappoint.

It is early in the Men’s and Women’s basketball season but I think they both are going to do outstanding. Men’s basketball is on a hot streak coming out the gate, and I think the team is going to have a big year. As of Nov. 28, Valdosta is seventh in scoring in D2 basketball and Beau Justice and Tyrone Sam leading the charge. Justice is scoring slightly more but Sam has better percentages from the field.

For women’s basketball, the team just has to show up ready to play and they will win another championship. They didn’t show up against Georgia Southwestern and got beat. Right now, the only people that are beating them is themselves.

The Blazers just have to remember that anyone can lose and I think the coaching staff has been making sure the team remembered that after their early loss.

It seems like the team has the ability to place better but just haven’t. At the Innisbrook Tournament where they place ninth out of 15 teams, the team was in fifth place in the first round.

The second round saw some inclement weather changes. It rained and was windy, and the team didn’t handle the weather well and dropped to ninth.

As an individual, Matt Anderson a sophomore from Lakeland, Florida, made Second Team All-Conference. He averaged a score of 72 in those four tournaments.

VSU’s football team was voted on to place second by the end of the season but placed fifth in the standings, sort of let down for the voters. The football team’s performance disappointed me. I was hoping they could’ve pulled out a few more wins in the season. It wasn’t Valdosta’s fault but it’s a shame the committee didn’t have VSU selected for the playoffs.

VSU beat two of the teams selected, on the road. That should have put them in the playoffs easily. Last season in 2016 the Blazers were 8-3 in their overall record. This season they had played a few less games and had a 5-4.

Despite the awkward season, a few players on the football team were rewarded for their outstanding play.

Malik Slater a linebacker from Tallahassee, Florida lead the GSC in tackles per game at 9.2 and was also voted in for First Team All-Conference.

Kevin Battle, a senior from Orlando, Florida, fought in the trenches to make First Team All-Conference as an offensive linemen.

Dallas Baldner a wide receiver from Homosassa, Florida, Joseph Mozone a defensive lineman from North Augusta, S.C., and Sharmaine Washington a linebacker from Moultrie, Georgia, were all selected for Second Team All-Conference.

The Cross Country season was filled with ups and downs. The men’s team placed well in their five races. They placed third out of seven teams, eighth out of 15 teams, fifth out of 20, fourth out of 13.

In the GSC XC Championship 8K the Blazers placed eleventh out of 13 teams. Last season in 2016 the men’s team moved on to the NCAA South Region Championships and placed slightly better during the season.

The women’s team did very well this season. The team placed fifth in all of their races and placed eleventh in their GSC XC Championship 5K.

In the championship race Tyra Holloway placed fourth and finished her 5K at 18:17.42.

The season was cut short and the teams did not compete in the NCAA South Region Championships races.

The Blazers volleyball team was picked to finished fourth in the preseason poll. With their conference record they placed ninth in the GSC. The volleyball team had a record of 3-8 on the road which put a damper on the season.

On the whole season I was expecting the team to do much better that finishing ninth. The Blazer need to be at least in the sixth seed to make the playoffs.

The team had a few spurts of wins but towards the end of the season the team needed another spurt of wins on the road and didn’t get it done.

Sydney Chick, a senior from Tallahassee, Florida, finished her career with over 1,000 digs and finished third in the conference in digs per set.

Sara Dandridge, a junior from Orange Park, Florida, she finished fifth in assists per set.

Tristyn Sells, a senior from Littleton, Colorado, she finished this season ninth in kills per set against conference opponents. Sells had 287 kills on the season and finished her career at VSU with about 475 kills.

Women’s soccer team made it into the GSC tournament for the first time since 2014. In the preseason polls, the team was voted to finish ninth in the conference. With a new head coach and many new players it was hard to hold high expectations for the group. However, the team exceeded any expectations that were hoped for. The Blazer’s record in 2016 was subpar, finishing with only one victory1-11-5. With Coach Stephen Andrews at the helm the team’s record was improved tremendously to 10-6-3.

The team only allowed 228 shots in 19 games and of those 228 shots only 27 of them hit the net. That’s an 11 percent goal percentage for their opponents on the season.

The Blazers shooting percentage was 14 percent which was enough to put them at fourth in scoring differential and second in scoring average in the conference.

In Division II women’s soccer the Blazers also finished in the top 20 in scoring offense. Bolstered by players Taylor Snell and Riley Tennant were selected as a part of the United Soccer Coaches All-Region team.

Tennant, a Sophomore from Ft. Lauderdale, Florida, was awarded third team All-Region and was sixth in points and sixth in goals. Tennant had 10 goals and 23 points during the season.

Snell, is a junior midfielder from Peachtree City, Georgia who finished the season fifth in points with 26 points and third in goals with 12 in the conference. Snell was named as an honorable mention All-American, the first in VSU Soccer history.

VSU is known as Titletown but no team delivered any championships to this sacred ground this semester. That does not go to say that the year was a waste, in fact all of the sports can build on the foundation that was laid.

While no team delivered a championship this semester the spring semester can produce multiple conference championships and possibly even a national championship. 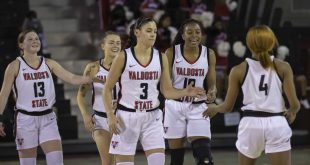