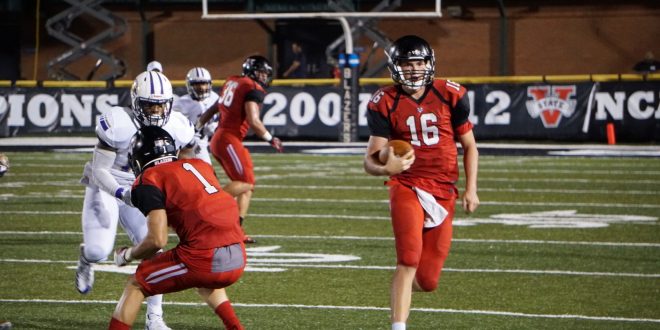 Rogan Wells was a staple for the VSU offense this season. He rushed for 498 yards and 8 touchdowns to complement his 1,405 passing yards and 12 passing touchdowns on the season.

Nobody anticipated seeing quarterback Rogan Wells take the field for VSU Football in 2017 but the redshirt freshman made the most of his shot in Titletown.

The Blazers came off a solid 8-3 season in 2016 and competed in the Division II playoffs in Head Coach Kerwin Bell’s first season.

Lead by their quarterback duo Roland Rivers and Adam Robles the Blazers finished No. 1 in passing yards for the Gulf South Conference.

Heading into the season the Blazers were without Rivers who was to forced sit out the season after surgery. All the attention shifted to Robles becoming the conductor of their high-powered offense.

Robles was selected as a preseason All-Conference player and the Blazers entered the season as the No. 11 team in the nation. That all changed in less than two quarters of play.

It didn’t take long for Wells to make his debut and he was subbed in for two quarters against Albany State. He threw for two touchdowns and racked up just over 200 yards of total offense.

“I was a little nervous, my first actual college game so I was out there a little nervous,” Wells said about his debut. “Everything was fast paced, but through the game I kind of slowed down.”

His play on the field and hard work in practice paid off and earned him the start for the Fort Valley State game the following week.

However, Hurricane Irma had different plans for Wells and the storm cancelled the non-conference game.

Setting up his first college start to be on an ESPN3 televised game against the No. 10 ranked team in the nation and rival, North Alabama.

“Getting named starter was a pretty big accomplishment I guess,” Wells said. “It made me more nervous because it was my first start and there’s big expectations, especially when going against North Alabama because they were pretty good last year.”

Wells kept the Blazers in a close game and trailed by just a touchdown before a late hit injured his shoulder forcing him to sit out for the remainder of the game.

His shoulder injury kept him sidelined for the next game and then came back to finish the remaining six games of 2017 as the starter.

Wells first full start was against West Georgia and the Blazers ended up losing 42-13, putting them at a 1-3 record on the season.

After the blowout loss, the Blazers season was close to being looked at as a lost cause but Wells was just getting started.

“The games started to get a lot easier after the West Georgia game,” Wells said. “I started watching more film, so that helped and just getting more reps in games helped a lot. I had to learn be more of a leader so I kind of progressed into that a little bit.”

Wells looked comfortable in that six-game span and threw for over 1,200 yards, rushed for 360 yards, and was responsible for 18 total touchdowns.

Out of the six-game stretch Valdosta won four of them, completely turning around the way season their season looked.

“Next season I’m looking forward to being just a better team so we can actually go to the playoffs, and hopefully be a lot better than this season,” Wells said.

The freshman solidified himself as not just the starting quarterback but as well as the feature running back for the Blazers.

A quiet season from sophomore running back and former GSC Freshman of the Year Cedric Hollingshed led to a lost identity in the Blazers backfield. The Blazers shuffled their way through five different backs throughout the season but Wells was a constant in the running game.

Wells found a way to make up for the inconsistency at running back and showed off his versatility, rushing for 498 yards and 8 touchdowns to complement his 1,405 passing yards and 12 passing touchdowns on the season.

Wells will likely enter the 2018 season with the starting position his to lose and will step into the role with as a redshirt sophomore that has to command the Blazer.