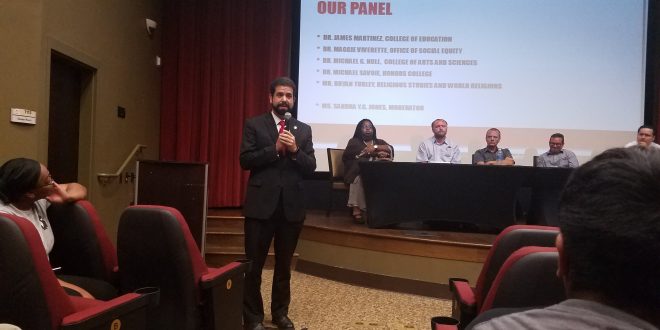 On Thursday, Nov. 28, attendants of the Budget Advisory Meeting were asked to pick their top three one-time and permanent funding requests for 2018 to represent VSU as a whole.

The attendees were given a spreadsheet with over 270 budget requests to choose from.

“This time is spent to try to hear from people and get their input so that we can make a better-informed decision,” Dr. Richard Carvajal, VSU president, said.

The renovation for study rooms in Odum library was listed for its constant use by students. Ideas for renovation add two more study rooms and a new system allowing students to reserve study rooms. The idea also includes the ability to lock the rooms using something similar to a hotel key.

The alumni database renewals were also listed, however, majority of the attendants’ top three requests were different.  Classroom upgrades, body cams for UPD and camera upgrades/replacements around campus were amongst that majority.

The meeting soon turned its attention to permanent budget requests. These requests included part-time salary increases in response to enrollment increases, more funding for international programs, license renewals for labs and budget increases for the library.

“We are looking for $1.3 million to make a budget hold for next semester,” Traycee Martin, vice president for finance and administration, said.

Part-time salary increases and the addition of more part-time workers was a topic of high interest. The reason behind it is to allow for more individuals specializing in a single department rather than an administrator attempting to take something on.

New software and database updates were widely discussed for its importance VSU’s modernity and function to give students the best technology and resources available.

International programs, also known as study abroad, is listed as a permanent budget request because these programs have shown to be very successful in the past. The students not only increase in skill level but overall human development and communication skills.

Martin explained the available budgets for next semester in comparison to last year. He said that last year’s budget came nowhere near $2 million.

“There are over $12 million in permanent funding requests and $17 million in one-time requests, but there is no way we could fund all of these requests,” Martin said.

VSU President Richard Carvajal wrapped up the meeting by reinstating how important these budget meetings are even though VSU does not have the money to fund everything.

“We learn a lot from this feedback, and we try to do the best we can with the information that these meetings give us,” Carvajal said. “A lot of the discussion that occurred mirrors the plans that we have for the future of the institution.”