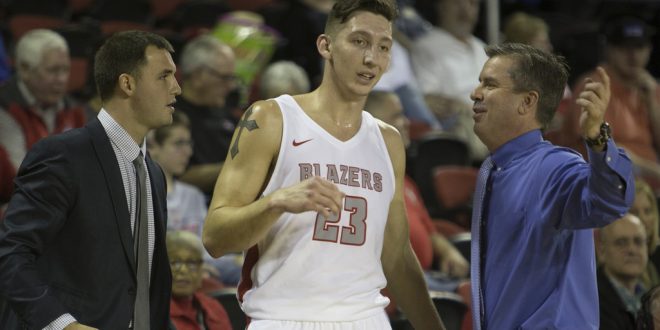 Blazer's Basketball is undefeated at home and will face the University of Shorter Hawks with that streak on the line.

This season the VSU Men’s Basketball team has seen a huge amount of success with just minimum failure.

The Blazers currently hold the No.1 spot in the Gulf South Conference standings with a 19-2 record. This past week, the Blazers went on the road to face Alabama-Huntsville University and North Alabama University.

In the first road game of last week, the Blazers defeated Alabama- Huntsville 97-93 after surviving a slow start and an overtime period.

Senior Forward KJ James displayed his versatility with six three-pointers in the game, including two in VSU’s 22-point overtime period. James’ 28-point performance led the Blazers to picking up the victory.

Junior Guard Beau Justice, the reigning GSC Player of the Week, added 18 in the game, followed by an additional 17 from Clay Guillozet.

During the overtime period, Junior Guard Winston Morgan came in the clutch, notching two timely three-pointers in the final five minutes of play. Morgan finished with four three-pointers and 15 points on the night.

To round out the road week, the Blazers traveled to Florence, Alabama, where they defeated North Alabama 101-99 in an overtime battle. The overtime contest marked VSU’s fourth of the season, each of which have resulted in victories for the Blazers.

The Blazers were led by Clay Guillozet, who matched his season-high of 24 points. The sophomore set the previous season high against Lee University in an overtime win on Jan. 2.

Guillozet came out of the gates swinging as he scored the first five points of the game for the Blazers. His scoring was needed, but it was not enough to sustain a long enough lead.

With 15-plus minutes left to play in the second half, VSU trailed by 13 points. The offense picked up gradually to start a comeback. For the next 10 minutes of play, the Blazers amped up the offense, taking its first lead of the second half with a dunk from KJ James.

Beau Justice wasted no time putting the Blazers ahead as he drilled a three-pointer in the overtime period that came after a pair of free throws from UNA Junior Sharwyn Mcgee.

The Blazers took control after an eight-point run. UNA started to trail back with a couple three-pointers, but by then, it was too late.

With that win, the Blazers improved to 12-1 in the GSC play and will return home to face Shorter University. Since January of 2017, VSU has 20 consecutive games at the Complex.

Statistically, the Blazers are shooting nearly 50 percent from the field and close to 40 percent from long range. The last time these two faced off was on Jan. 4, where the Blazers coasted to a 91-77 win. KJ James poured in 32 points, followed by Justice’s 3 three-pointers to go along with 23 total points.

Previous Softball set to ‘tee’ off season
Next The Grammys: The best and worst moments