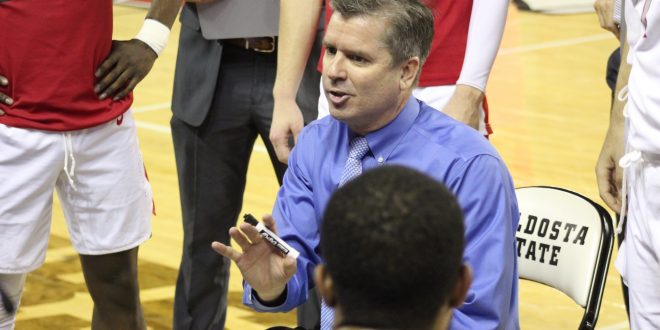 Head Coach Mike Helfer continues to take the VSU Men's Basketball team to new heights. The team currently is No. 9 in the nation and storming towards the conference and national championships.

Mike Helfer’s fiery passion and cool confidence make him one of the most respected coaches in the country but his success never came overnight.

Helfer was born in Newark, Ohio, where he attended Newark Catholic High School. During his teenage years, Helfer was heavily involved with athletics. He was a tri-sport star, receiving All-State honors in basketball and football, while making the state championship in track.

Upon graduation, the three-time letter-winner decided to attend Capital University in Columbus, Ohio, where he decided to continue his athletic skills on the hardwood. While playing for the Crusaders, Helfer developed a lasting bond with then-head coach Dave Cecutti.

“It was a great experience,” Helfer said. “The best part about my experience there was that I had a great relationship with my head coach that still exists to this day.”

Even now, he enjoys hanging out with his former head coach.

“We get together in the summer and play golf or do something,” Helfer said. “We stay in touch.”

For his first two years out of college Helfer was a volunteer assistant for his alma mater. Cecutti’s tutelage was a key to Helfer getting his first official assistant coaching job at Kent State University in 1991. Helfer worked with the school through the 1994-1995 season.

After his stint with the Golden Flashes, he took a position at Grand Valley State University, where he helped the Lakers to a 26-6 season and a ticket to the NCAA Division II tournament.

Helfer also said that there is a distinct difference between head coach and assistant coach.

The knowledge he learned as the right hand to the head coach ultimately led Helfer to running his own program at Southern Polytechnic State University. As the head coach for the Running Hornets for eight years, Helfer amassed 186 victories and 83 losses. His total record at SPSU averages to about 23 wins a year.

His first two seasons at SPSU were his only two non-winning seasons, as he went 16-16 in 1997-1998 and 14-18 in 1998-1999. The following season, Helfer changed the dynamic, as he wheeled the team to a 28-7 record while capturing his first SSAC regular season and tournament championships.

Helfer’s last season as the Running Hornets head coach was highly successful, as he orchestrated a 32-4 record and won both regular season and tournament titles for the SSAC. Under his leadership, SPSU earned its first ever No. 1 national ranking.

After holding the clipboard and drawing up plays for the Running Hornets, Helfer reflected on how his first ever head coaching position helps him now.

“I learned how to get a program to the national level and how to keep it there,” Helfer said, who was also named SSAC Coach of the Year, said.

The Ohio-native was offered a head coaching position at VSU following his departure from SPSU and he did not hesitate to accept it. The rest is history, as Helfer is currently in his twelfth season at VSU.

Helfer has cemented himself as one of the top head coaches in the nation, compiling a total of 201 wins to 119 loses in his first 11 years. In the time since becoming head coach, Helfer has nine winning seasons, while making the Blazers a huge attraction in the Gulf South Conference

His first season at the helm for the Blazers was in 2005-2006, as he inherited a squad that averaged 68 points per contest in the previous season. Helfer rewrote the narrative by leading the team to a 17-11 record while averaging about 83 points per game.

Statistically, Helfer’s best year at VSU was during the 2009-2010 season, as he led his team further than any other team in school history for men’s basketball. Helfer facilitated a school record 28 wins to five loses, reaching the national quarterfinals.

Records continued to be broken that year as the team set the school mark for points in a season with 2,666 to top the previous mark of 2,591 set in 1967. Helfer ended that season sharing the GSC East Division Coach of the Year award, which he had earned the year before as well.

Winning and racking up accolades are very rewarding for any coach, but Helfer’s greatest accomplishments at VSU has come from the men that lace their shoes up and play for him.

“The best part of my job at VSU has been all the players,” Helfer said. “The relationships that I have developed with all of the players. That’s going to continue for the rest of our lives.”

“As a player, you learn kind of what he likes and what he wants out of his players,” Justice said. “Then you get to the coaching side and it’s a whole different aspect.”

Justice also said that the knowledge he has gained from Helfer could potentially help with running a program of his own.

“Yes, I think obviously [coaching] comes with experience,” Justice said. “Playing for him and learning from him has sort of put me over the curve.”

“I have full trust with him,” the younger Justice said. “Even if he takes me out and I am feeling good, so I trust him.”

Besides coaching the Justice brothers, Helfer has been a huge friend of the family away from the hardwood.

“He actually went to the same college that my dad went to, so there is a little connection there,” Beau Justice said. “That was the connection that got me and Blake to come down here, so obviously he has been really good to us.”

Just like both the brothers, Helfer wants to ultimately bring a championship to a school and town that has yet to witness one from the basketball program.