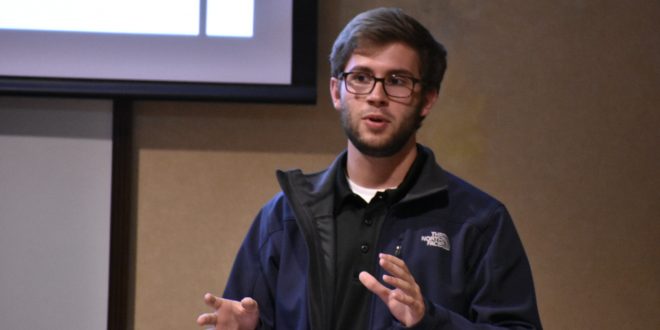 Jacob Bell is SGA's current Speaker of the Senate and is running as 2018-2019's SGA presidential candidate.

Get to know the SGA presidential candidate: Jacob Bell

Baxley, Georgia native, Jacob Bell, is a 20-year-old sophomore economics major with his eyes on the prize.

In the sixth grade, Bell read a statement made by Nelson Mandela: “What counts in life is not the mere fact that we have lived. It is what difference we have made to the lives of others that will determine the significance of the life we lead.”

This quote is why Bell decided to join SGA and make a real difference in the lives of others. In running for SGA president, Bell said he believes the opportunity to make substantial contributions to many lives is well worth any associated cost.

Prior to attending VSU however, Bell had very different plans for his life.

“My whole life I intended to attend the University of Georgia; however, during my senior year, Valdosta State offered me an academic scholarship,” Bell said. “I attended open house with a friend, and a few weeks later, I made the decision to decline admission to UGA and attend VSU. It was one of the hardest but one of the best decisions I’ve made.”

Bell also decided to attend VSU because it was a school that reminded him of home.

“My grandmother, Diane Hallman, was elected against all odds to be Appling County’s Probate Judge in 1976,” Bell said. “She has taught me what it means to be a leader, a humanitarian and a feminist.”

As a major role model in his life, his grandmother has shown him how to be a friend and a leader.

Bell is involved in various student organizations such as Blue Key Honors Society, Valdosta Plus and the Parking Committee. Here, his hand is in some of the major behind-the-scenes actions that he believes is an asset to building the right connections between the student body and university administrators.

“I am never focused on myself or my ego,” Bell said. “I do things for the campus. This is a campus that I love, and I see so much potential in making a change and helping the student body once again love the campus that they chose.”

With a passion and love for the diversity at VSU, Bell found that the best way to impact the campus would be to join SGA. As a member of the Senate, Bell gained the ability to look at things from a political standpoint which eventually inspired him to run for SGA president.

“I have a problem with problems that shouldn’t be problems,” Bell said. “What we can do in student government is highlight the significance of Greek Life, Blazer Athletics and making campus what it should be for the student body.”

With the campaign of “A United Team for a United Campus,” Bell’s ticket consists of a team of sophomores and one freshman: Amea Thompson, for vice-president, Rachel Tessin for secretary, and Krupesh Patel for comptroller. Together, they put a focus on upholding integrity, inclusion and better connecting VSU to the student body.

Excited for the election and the impact that can be made to better the campus, Bell and his team have their head in the game.

Regardless if he wins or not, Bell is happy to assist where he can.