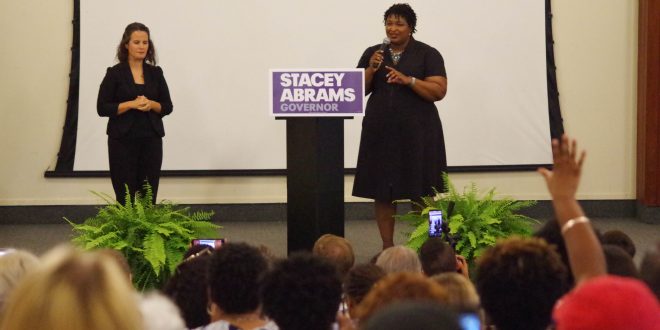 Stacey Abrams speaks to VSU students and Valdosta citizens about her plans for Georgia.

“My name is Stacey Abrams and I intend to be the next governor of Georgia.”

It’s this statement that the 2018 Democratic nominee for governor of Georgia used to impact and draw in the crowd.

At an event hosted by the Young Democrats of Valdosta State University on Aug. 23 in Powell Hall, Abrams discussed her vision for Georgia in an open environment that allowed locals to get a peek at her campaign first hand.

“I’m excited to be back here in Valdosta because I’m not running to be the governor of Atlanta but all of Georgia,” Abrams said.

Confident in her ability to win, she said Georgia is ready for change. While the state is doing well overall, she said there are numbers that should be higher and others that could be lower. For instance, the unemployment rate is 3.9 percent, followed by a poverty rate of 18.4.

One of Abrams’ main objectives is to not only create jobs in Georgia but to retain them.

“Every Georgian deserves the freedom and opportunity to thrive but too many are being left behind or left out,” Abrams said.

With global warming being a real issue everywhere, she believes that Georgia should be in the front of the renewable energy innovation revolution.

In that, Abrams intends to invest in a $40 million green bank fund that will leverage a quarter of a billion dollars for investment in the state and provide up to 45,000 well-paying jobs for Georgians.

She then went into healthcare and how Medicaid expansion is the best economic development opportunity Georgia has ever had.

“Just dollars can bring doctors to rural areas and cover half a million citizens with healthcare regardless of social standing,” Abrams said. “Everyone’s cost will go down, and their healthcare improvements will go up.”

Healthcare led to the internet and how she supports the idea of internet access being a necessity in today’s world— for 6,000 Georgians in rural counties, internet access is as far away as Spain.

Abrams spoke about criminal justice reform when questioned, leading with the statement that “poverty has to stop being a crime.”

Abrams said the state of Georgia treats traffic offenses like criminal offenses and that the cash bail system needs to end immediately.

“People shouldn’t be but in jail because we’re upset with their behavior but because they genuinely threaten the well-being of others,” Abrams said.

Leaving jail should end your sentence but right now in the state of Georgia, ex-cons can’t find housing, let alone decent jobs or the help they need to get back on their own feet.

Where she herself supports hunting weapons, assault rifles are out of the question. The safety of individuals who own guns and those around them comes first, but there needs to be an understanding that said precautions are for everyone’s best interest.

Endorsed by Georgia Equality, Abrams made it clear that she has always supported the LGBTQ+ community as an ally, stating that her rights aren’t secured until all rights are secured. She has spoken out in favor of marriage equality for years and plans to continue doing so during her time as governor.

Need-based aid is another topic that Abrams spoke strongly about when asked. She wants to be the governor of public education and looks to stabilize funds for the Hope scholarship, something that many Georgian students rely on when it comes to obtaining higher education.

The final question of the night was one revolving around immigration and again, Abrams had a lot to say.

She believes that immigration reform is a federal issue and bipartisan leadership needs to make certain that thoughtful immigration laws are put into place soon, helping to create a paths towards citizenship for immigrants in the United States.

“The state of Georgia is responsible for enforcing state law,” Abrams said.

With that being said, Abrams believes criminal offenses need to be punished regardless of legal status but education and safety from law enforcement should be available regardless of ethnic background.

Her campaign is full of progressive changes as Stacey Abrams has the potential to become not only the first ever woman in Georgia’s governor’s seat but the first person of color.

Abrams faces off against Republican nominee Brian Kemp at the 2018 Georgia Gubernatorial Election on Nov. 6.