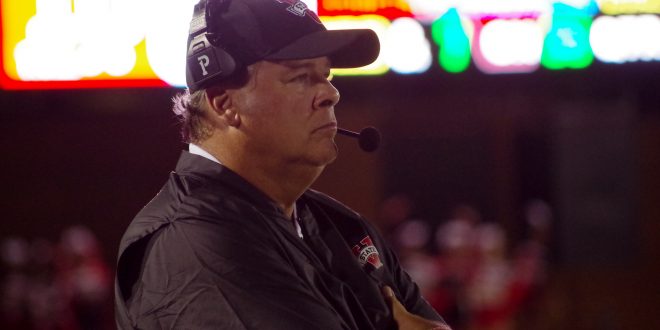 Head Coach Kerwin Bell looks to continue the momentum in hopes of going 5-0 against the Mississippi College Choctaws this Saturday.

With great power comes great responsibility, and the Blazers will have a lot of responsibility with their new ranking in the AFCA Coaches poll.

Saturday evening, Valdosta State entered their matchup No. 16 in the poll. After crushing Shorter 52-0 and improving to a convincing 4-0 on the season, they moved up three spots to No. 13. The news was released Monday afternoon.

The Mavericks amassed 26 of 33 first place votes and 811 total points this week to move into the top position.

Midwestern State rounded out the top five of the poll.

The West Georgia Wildcats, VSU’s conference rival, moved to No. 6 following its victory over previously unbeaten Florida Tech last weekend.  Ouachita Baptist is No. 7, followed by Minnesota-Duluth, with Texas A&M-Commerce and Pittsburg State rounding out the top ten.

West Alabama is No. 21 among teams from the GSC.  Florida Tech missed the top 25 but received a few votes.

The Blazers lead the nation in scoring offense averaging 53 points per game as the squad has scored 50 or more points in each of the four games this season.  The defense is no slouch either, holding teams to just 11 points per game, which ranks No. 5 in the country.

VSU gets back on the road on Saturday evening at 8 p.m. ET at Mississippi College in Clinton, Miss. The Choctaws are 2-1 on the season and 0-1 in GSC play. The Blazers are 2-0 in conference play.