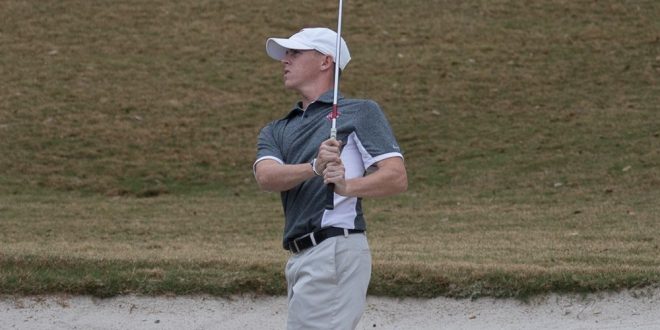 The Blazers came into Tuesday with a one-shot lead, and after Jordan Long tallied three straight birdies to start his round, it appeared as though the Blazers were in the process of starting their season with a victory.

VSU, when counting all five scores, combined for a score of six over par on those first three holes.

Then hole four happened, where the Blazers were six over par on the day, and Carson-Newman University rained on the tournament parade, posting a 10 under total Tuesday to win VSU’s first event of the year.

Unranked and with some unknowns apart from two-time All-Gulf South Conference performer Matt Anderson and the junior, Long, the Blazers demonstrated that they could compete with some of the nation’s best in this event.  In particular, three freshmen, Brock Healy, Davis Smith, and Gage Smith revealed to the pollsters what they are capable of doing.

“This trio of freshmen, to me, is something special,” Davis Smith said.  “In our first college tournament, we all shot even par.  I’ve known both of the other freshman for a while, and I know that we are capable of some really good golf.”

Both Healy and Davis Smith demonstrated how they would fare when dealing with adversity.  On Tuesday, both of them were four over par through 11 and 12 respectively, but finished even and one over par for the day.

In round one Monday, Smith, in his first ever hole as a college golfer, made triple bogey on the Country Club of Columbus’ signature 11th, a hole highlighted in my preview piece, by hitting a wedge shot short, a mis-hit that came with its usual consequence of the ball spinning back into the water.  He responded with four straight pars initially and then later made five birdies on his way to an opening round even par 71.

Freshman Gage Smith played steady, beginning on the back nine in round two, where he rattled off six straight pars. In the final round, Smith exemplified that claim with 16 pars in his round of 69.

Anderson, known for his reliability, was the low Blazer in this tournament.  He finished tied for 12th with scores of 70, 71, and 70 or an aggregate two under-par.

Long, despite not being on the top of his game over the course of the two days, kept fighting in hopes of helping his team.  When commenting about his round on Tuesday, Coach Jared Purvis said in a positive fashion that Long “battled the entire day.”

Lincoln Memorial University’s Sam Broadhurst won the tournament as an individual, with a birdie on the first playoff hole, the second win for him in as many attempts so far this year.  His other win came two weeks ago at the Coker Fall Challenge in Camden, South Carolina.

The course played more difficult than the yardage as predicted, but the scores in general were higher than even the experts thought.  Purvis said that the “very difficult pin locations” may have caused scores to be higher than they could have been, referring to the field in general, not his team specifically.

Purvis also said that it was “warm, muggy, and windy at times” and that CCC was “soft from recent rains.”

The Blazers didn’t win Tuesday, but their strong opening third place showing sent a message to those who oppose them through the remainder of the year.

“This team battles,” Davis Smith said.  “We fight until we tap in on the last hole.  If we can straighten some things up, I believe we can break through and get a win this year.”

As a college student it’s far too easy to go about our day disregarding our ...