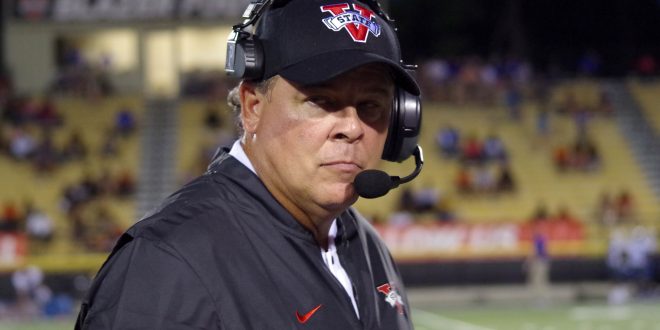 Blazers post 614 yards of total offense, the most ever in the Kerwin Bell era.

Posting a season-high of 63 points and 614 yards, the No. 13 VSU football team posted a 63-42 victory at Mississippi College Saturday evening.  VSU Sophomore Signal Caller Rogan Wells threw a career-high six touchdown passes in the game, giving him 19 on the season.

The game saw a combined 1,129 yards of offense and 15 touchdowns. Along with the total yardage from the Blazers, that stat is most in the Kerwin Bell era.

Sophomore Wide Receiver Brian Saunds caught the first of six TD strikes from Wells for 10 yards and a 7-7 score on the following drive.

The second quarter held the most scoring during the entire game. Seven touchdowns between the two teams and 49 points combined with 35 from the Blazers, the Choctaws took a 14-7 lead as Quarterback Detric Hawthorn scrambled and eluded the ‘Black Swarm’ pressure for a score with 13:11 left in the first half.

Wells connected with Junior Darrel Myers for the first of two touchdowns for Myers on a streak for 24-yards and a 14-14 score.

During the following Choctaws drive, Junior Darius Smalls robbed Choctaw Backup Quarterback Aaron Feazelle and recovered the ball at the Choctaws 33-yard line. Before the fumble, Hawthorn took a big hit on the play, leaving him out of action.

The Blazers took its first lead as Redshirt Freshman and GSC Leading Rusher Jamar Thompkins scored from 43 yards out, giving the Blazers a 21-14 lead.

The Choctaws come back with their own score on the ensuing drive, but the Blazers regained control at 28-21 as Wells found Myers for an eight-yard dart with 6:02 left in the half.

Wells continued to spread the wealth after a Choctaws punt, finding Junior Lio’undre Gallimore for a 42-yard strike and Wells’ fourth touchdown of the half for a 35-21 lead. Gallimore currently has three touchdowns on the season following the matchup.

Thompkins got into the endzone late in the first half, rushing for 68-yards, boosting the score to a 42-21 lead.

The Blazers dug deep, and Wells called his own number for a 56-35 score with 1:23 left in the third.

On a bobbled snap by Wells, he picked up the ball and found a Streaking Senior Stewart Spence on a fly-route down the sideline for a 37-yard touchdown and his career-best sixth touchdown pass of the game was secured, a 63-35 lead with 9:04 left.

The Blazers had seven scoring drives of under two minutes and four of under a minute.

At this point, the Choctaws were playing for pride, scoring one more touchdown as Feazelle rushed from two yards out for the final score of 63-42.

On the flip side, the pride of the ‘Black Swarm’ defense was on full display. The Blazers defense was led by Senior Guito Ervilus with 11 total tackles and 10 solo stops, along with one tackle for loss. The Blazers amassed 77 tackles in the contest.

The Blazers entered the game leading the nation in scoring offense at 52.5 points per game and now is averaging 54.6, while allowing 17.2.

The month of September was finished unblemished for the first time since 2011 when playing four or more games in the month.