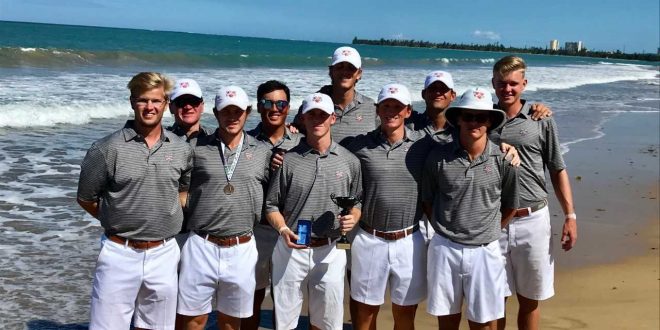 VSU Golf will travel to Lakeland, Florida to play in the Matlock Collegiatel on Monday, Feb 11.

Anderson won a college event for the first time in his career, after giving himself a four shot lead going into the final round Tuesday.  At a venue where putting is difficult due to the nature of the greens, his tournament-low 68 on Monday included four birdies on the back nine.

“I executed perfectly during the back nine on Monday,” Anderson said.  “I was able to make a couple long birdie putts on 16 and 17, along with a clutch up-and-down from left of the green on 18 to save par.”

The UIS Island Getaway only consisted of two rounds instead of the normal three for a collegiate event, but the Blazers made their trip down to Rio Grande, Puerto Rico worthwhile.

“Winning is what you always strive for,” Purvis said.  “Hopefully the victory will increase their confidence in producing winning results.”

Freshman Brock Healy finished just two shots off Anderson’s lead with rounds of 72 and 74.  On Monday, his even par score included birdies on 11 and 16 and an eagle on the par 5 15th.

On Tuesday, Healy made par on the entire front nine, but went bogey-bogey to start the back.  He made a birdie on the hole he eagled the previous day and bogeyed the next one, before signing his scorecard.

In total, VSU’s A-team won the event by 19 strokes over host Illinois-Springfield.

The Blazers’ B-team, led by Chase “Stormy” Weathers, came in 6th in the field of seven at 58 over.

Weathers, who came in a tie for 8th as an individual, found himself in a tie for 4th after Monday after going 34-39 with three birdies on the front side.  In round two, the freshman didn’t fair as well to start with, posting a five bogey 41, but played the finishing nine well with an even par 36.

Jordan Long, a member of the A-team, tied Weathers at six over-par for the tournament.  He posted the same scores but on different days.  In the process of his final round 73, Long made two birdies on the front and parred each of his last nine holes.

On Tuesday, Long hit 15 of 18 greens in regulation, but “just didn’t get any putts to drop.”

The two Smiths per usual participated in the event, both on the A-team for Purvis.

Smith posted a 45 on the front side Monday, a number he attributed to having trouble finding the fairway.

Davis, the other Smith, rebounded after struggling at both PGA National and Copperhead.  On Monday, the freshman “hit the ball about as good as” he has “all year” on his way to turning in a three over 75.  On Tuesday, Smith shot one stroke higher, earning a 10th place finish.

“The last two tournaments I’ve played very poorly, and I just knew I had to stay patient and keep working hard and trust in my game,” Smith said.  “This week showed me that I can still play those good rounds and help out the team.”

Purvis said that VSU “stuck to a game plan and remained patient even when it was going the way they wanted.”

He described the weather as “perfect,” and another positive was that there was no rain to impede or stop play, which can easily be a possibility in Puerto Rico’s Caribbean climate.

A common citation from the players was the state of the greens, an element that we were aware of prior to the start of play.

“The main outlier for this event is the condition of the greens,” Anderson said.  “They tend to be slower and bumpy during this tournament, which makes it hard for anyone to make putts.”

The significance of the win could be difficult to measure, especially considering there was a stronger field at the McDonough Cup in Orlando.

“We came to PR to get a win, and we did,” Long said.  “That’s always the goal no matter who is in the field.  I think it is a good way to end the fall and head into the spring.”

Previous Editorial: Georgia governor’s race needs to rewrite history
Next Nothing less than a classic