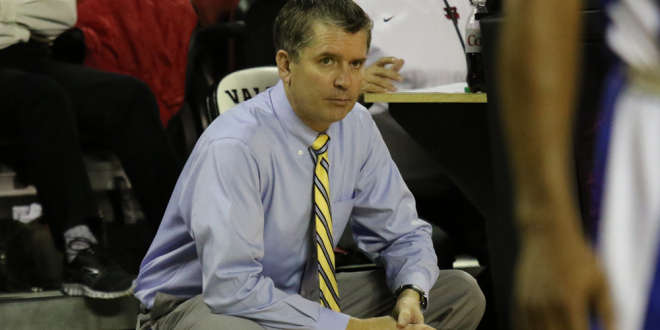 The Blazers are currently 3-0 and are looking for another win against Albany State on Nov 15.

Even when Beau Justice has a slow start, teams still haven’t taken advantage.

The VSU men’s basketball team overcame a second-half explosion from Tuskegee University to come away with a 93-81 victory at home Tuesday night.

The Blazers were led by Justice, the reigning Gulf South Conference Player of the Year. Justice scored a game-high 30 points, while flirting with a triple double, adding seven rebounds and seven assists.

Justice is an igniter for the VSU faithful, yet it took a while for the flame to start.

“I think the aggressiveness came from a little sluggish start at the beginning,” said Justice, who had 10 points in the first half. “I knew myself, I needed to be aggressive to get in the paint and get other people some good shots.”

The aggressive nature ultimately led to Justice cashing in on a lot of points at the foul line, attempted 13 free throws on the night, with 10 makes.

“My shots are going to come, just because of the experience I have on these types of teams. … I know where I can get my looks, but once I knew I could get in the gaps and come off ball screens, I knew that would get other people going.”

Because Justice wasn’t delivering in the first half, Head Coach Mike Helfer leaned on the shoulders of his bench play. The Blazers’ bench had a major impact in the first 20 minutes, outscoring the Tigers’ reserves 24-5.

Transfer guard Desmond DeRamus served as the first guard off the bench, scoring 16 points and notching a game-high three steals.

DeRamus played his inaugural game in front of the home crowd, giving them 29 minutes of pure energy on both ends of the floor.

“I just wanted to come off and bring energy to the team and show them what I can do,” DeRamus said. “Those boys got me right. They talked to me through the whole game, they helped me play a great game. If it wasn’t for my teammates, I wouldn’t be able to do any of this.”

The Blazers found themselves looking to shoot the Golden Tigers out of the game after building up a huge second-half lead. The Golden Tigers began to chip away by taking advantage of lackluster defense by the Blazers.

After being outscored 29-14 in the paint in the first half, the Golden Tigers outscored the Blazers 28-20 after halftime as they shot 50.9 percent in the contest.

Helfer saw the game slipping away, forcing him to call for time with 4:11 left in the game.

“I thought Tuskegee turned up their aggressiveness and we just kind of were reacting to them instead of trying to be proactive on the defensive side,” Helfer said of the second half performance. “Our guys have got to understand that a 20-point lead in today’s basketball game is not 20 points anymore.”

Helfer knew that Tuskegee had the ability to go on a run.

“Teams can score fast, they can make 3s –– a lot of things can happen as we saw quickly. (Our lead) was shrinking and I had to use a timeout,” he said.

The Blazers drilled 10-of-25 from 3-point range and shot 51.6 percent from the floor on Tuesday. Also, they forced nine Tuskegee turnovers and turned them into 12 points.

VSU will continue their five game home stand, as they will host Albany State on Thursday Nov. 15. The game is slated to begin at 7:30 p.m. ET.