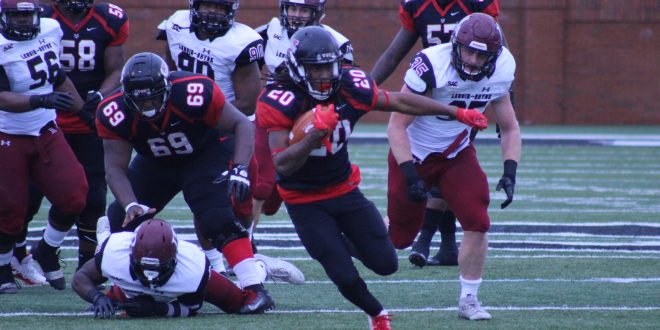 VSU put together their most complete game to advance to the semifinals.

The Blazers are one more win away from punching their ticket to the national championship after torching Lenoir-Rhyne 61-21 in the NCAA quarterfinals.

It was arguably the most dominant performance by Valdosta State all year long as they poured in 34 points before the half while the Bears could only squeeze seven points.

Offensively, the Blazers looked like the greatest show on turf and showed their supremacy through the entire game.

From start to finish, the Bears could not get anything started against the Black Swarm. In the first half, quarterback Grayson Willingham threw three interceptions and the team had gained just 137 yards of total offense.

“They’re good at all 11 positions,” said Bears Head Coach Drew Cronic. “They have great team speed and they do a great job coaching and a good job at isolating you.”

That speed was on display today as the Blazers had three running backs with 80+ yards on the ground and it looked as if their defense covered every yard of the field. Before meeting the Black Swarm, the Bears averaged 280 rushing yards per game but were held to just 112 rushing yards against the Blazers.

So far, the Blazers have scored 127 points in their post season run, that’s an average of 63.5 points per game. The Blazers are playing their best football now and stand one game away from a national championship opportunity.

“You know, I’m disappointed with our fans, I thought South Georgia was all about football,” VSU Head Coach Kerwin Bell said after the game. “We got to get more people in the stands, hopefully we’ll have a home playoff game again … I know people love football here, and listen, if you want to see good football you got to come out and watch this football team … I’m sure they want to see this football team before we go win a national championship.”

Bell’s wishes will be answered as the Blazers will host one of the semifinal matchups on Saturday at noon. The final four teams were reseeded to determine who would receive home field advantage for next weekend and VSU was chosen as the top team in the nation for the first time this season.

VSU is set to face Notre Dame of Ohio in the NCAA Semifinals after the Falcons scraped by Slippery Rock today, 21-17. VSU and Notre Dame were both No.1 seeds in their respective regions, however the Blazers entered the postseason ranked No.3 in the nation while Notre Dame was ranked No.10.

The Blazer Summer Research Institute is a competitive program for VSU faculty and undergraduate students. ...