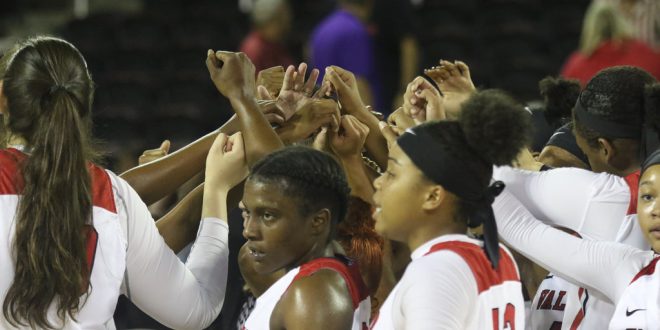 Lady Blazers improve to 3-3 on the season, 1-1 in conference play.

After falling in three straight games, the Lady Blazers came away with a 67-53 victory against Gulf South Conference opponent, the Christian Brothers Lady Buccaneers.

The Lady Blazers and Lady Bucs got off to a competitive game, ending the first quarter with VSU up 16-14.

Once the second quarter begun, the Lady Blazers began to blow open the game, outscoring the Lady Bucs 18-11.

Seven of the nine players that suited for the Lady Blazers each got on the scoring card during the first half, led by Maddy Corazza with six points.

In the third quarter, the Bucs scraped away at the lead, led by Guard Kelsey Adkins, who had 14 points in the game.

This run was short lived. In the fourth quarter, the Lady Blazers left the Lady Bucs in dust, outscoring them 15-5.

Guard Crystal Townsend provided a spark off the bench with 12 points and seven rebounds.

The head of it all was Forward Maddy Corazza who had 15 points, four rebounds and three assists.

The Lady Blazers shot 31.8 percent from the field during their three game losing streak.

Saturday, that jumped to 40.3 percent.

Corazza felt that the three game slump for the Lady Blazers was a thing in the past.

“We realized we need to play team basketball instead of individual basketball,” Corazza said. “We’re putting the past three games behind us and not letting that determine our future.”

Head Coach Carley Kuhns was impressed with how her team came up big tonight. The Lady Blazers ended the game with eight different players getting on the scoreboard.

“Our energy was completely different,” Kuhns said. “We stopped worrying about missing shots and worried about playing.”

Kuhns explained that this GSC victory gives this team more confidence heading into the rest of the season.

“We needed to see a win, and I think that will change the dynamic for us.”

The next Lady Blazers game will come on Tuesday, Dec. 4 as they will host the University of Tampa Lady Spartans.