Home / Sports / Blazers prepare to face Bulldogs for the title 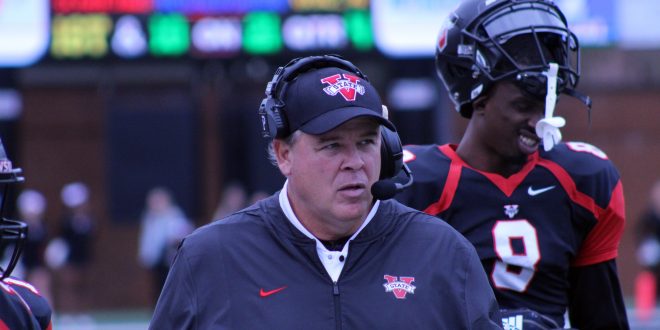 VSU will be facing yet another test but this one comes with a national championship waiting on the other side.

Blazers prepare to face Bulldogs for the title

Valdosta State’s football team is getting ready to play on the grandest stage in Division II Football and potentially end their historic season with a national championship.

Only one more team stands in between them and glory and that’s the Ferris State Bulldogs.

Ferris State is undefeated as well and is powered by their Harlon Hill finalist quarterback, Jayru Campbell.

Campbell is responsible for just about all their success this year and there’s no doubting why he’s a Harlon Hill Trophy finalist.

He’s 19th in the nation for passing yards with 2,832 and translated that into 26 touchdowns (T-20th) with just five interceptions on a 60.6% completion rate.

Those numbers are notable but that’s not all. Campbell has wheels too.

It’s obvious the proficiency of Ferris State’s high-volume offense solely relies on Campbell’s shoulders, so VSU’s focus will be all on him.

“You can’t let him get comfortable,” Blazers Head Coach Kerwin Bell said. “Any great quarterback like that you got to make sure you show him different looks. You got to get pressure, you got to play on their side of the ball and play fast…he’s a really good athlete, he makes them go, and it’s going to be a big challenge for us.”

Playing fast is what the Blazers are starting to be known for.

The Black Swarm leads the nation in defensive touchdowns with seven, and six of them came from interception returns. They’re also ranked 14th in turnovers gained with 26 this year.

In the postseason alone, VSU has forced seven turnovers and has intercepted every quarterback they’ve seen. One of those quarterbacks was another Harlon Hill Trophy finalist in Bowie State’s Amir Hall.

Hall threw for 287 passing yards with two touchdowns and an interception when they faced the Blazers in the second round of the playoffs.

He orchestrated Bowie’s entire attack, barley handing off the ball. By halftime he already tallied 211 of his passing yards with two touchdowns and a pick. The score was 21-16 in VSU’s favor.

211 of his 287 yards and both touchdowns occurred in the first half.

So, Ferris State’s Campbell will be just another Harlon Hill finalist trying to ruin VSU’s season; and even though this game is for the title, the Blazers’ have not abandoned the approach that got them here.

On offense, not much else can be said that hasn’t already been said all year long. But let’s revisit some things:

VSU is the most prolific offense in the nation and is led by Rogan Wells, their self-effacing quarterback and finalist for the Harlon.

He operates the nation’s highest scoring offense that averages 52.2 points per game. Ferris State has allowed an average of 18.6 points per game and they may have a chance to give VSU frustrations in the beginning of the game, as the Blazers tend to get off to a slow start.

The Bulldogs are strong up front and rank 20th in rushing defense, however they’ll be in the trenches against one of the best offensive lines in the nation. VSU is 6th for rushing yards per game with 273.4 yards and is 19th in tackles for a loss allowed.

Play fast, score faster, that’s their approach. Out of all the 169 DII football programs VSU is 129th in total time of possession. When compared to teams that have played at least 13 games, the Blazers have the lowest time of possession in the nation making them the fastest team and highest scoring team.

Ferris State could try to keep the Blazers off the field to reduce their chance of exploding for a game changing drives, but the Blazers conquered that test last week against Notre Dame College, a significantly better defense statistically compared to Ferris State.

All year long, VSU has demonstrated dominance and resiliency, they have what it takes to be champions.

The question is, does Ferris State have enough to stop them?

The game will take place in McKinney, Texas on Dec. 15 at 4 p.m. EST and will be broadcasted on ESPNU and streamed on the ESPN app.

Previous Senior Spotlight: Amari Evans
Next Flying under the radar: Black Swarm has one more test