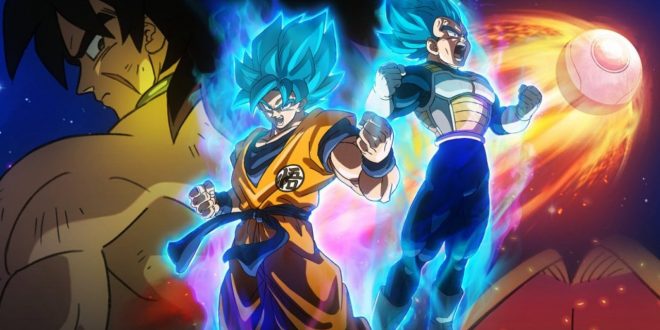 Dragon Ball Super: Broly is the definitive Dragon Ball experience. One that has been years in the making.

Though the movie came out in U.S. theaters on Jan. 16, fans have been waiting for this movie since its first trailer. Even before that, for some.

The movie is the most story-driven Dragon Ball movie yet and actually answers a question that even Dragon Ball’s three series—four, if you count GT—haven’t answered: What were the Saiyans like before they were wiped out?

Of course the story revolves around Vegeta, Goku and Broly, as well as their parents. But besides them, viewers got a chance to see the busy hub that was Planet Vegeta.

We saw the Saiyans in different occupations like scientists and cargo loaders. We saw the regal hall of King Vegeta, with a moment of spite from him towards Broly and his father. We even got a chance to share a tender moment with Gine and Bardock, Goku’s mom and dad. Too bad it all gets ruined by Frieza. He’s always ruining something.

To be honest, the Saiyans should’ve known something was up when Frieza’s first reaction with them was a gleeful “Hello monkeys.”

From there, we are taken into a quick montage featuring the fate of the Saiyans, as well as the story of Dragon Ball that ends with the viewer watching Vegeta and Goku spar. But wait, there’s more: The Dragon Balls have been stolen just when Bulma decided to use them to get five years younger.

Of course the culprit’s a mystery. So sad. Just kidding, it’s Frieza. Like I said before, he’s always ruining something. Fortunately for Goku and Vegeta, Frieza just wants to get five inches taller.

At this point in the movie, world building takes over, and the viewers get a taste of what the Frieza Force is like. They’re not all bad, especially the two that saved Broly and his father, Paragus, from the barren wasteland they were exiled to.

Here’s where things get weird and sad. Though the two Saiyans are saved, they aren’t fazed by the destruction of the Saiyans. Broly seems more like a pet to Paragus rather than a son, and Paragus seems like an abusive father. After all, he did put an electric collar around his son’s throat.

Then, to make matters worse, Paragus aligns himself with Frieza to kill Vegeta—a Saiyan teaming up with the genocidal psychopath who killed his people in order to kill one of the last of his people. Come on now. Let’s get back to the heist though.

Bulma, Goku and Vegeta are hot on the trail of two mediocre Frieza Force members. When the trio finally get to them, things get a little bit dicey. The thieves pack into their ship, but Goku and Vegeta aren’t stunting it. They let the thieves think they’re safe then proceed to take their spaceship down and scare the living mess out them.

Unfortunately, Vegeta and Goku were unable to salvage the Dragon Balls before Frieza arrives. Now, Frieza is already excited that he has the Dragon Balls. But given the opportunity to pit his new Saiyan soldier against Vegeta—Frieza wants Goku for himself—oh, he just couldn’t help it.

And so a fight ensues. It’s Broly against Vegeta, and while Vegeta has no problem at first, Broly quickly adapts, forcing Vegeta to go Super Saiyan, and later, Super Saiyan God. Though Vegeta didn’t appear to be in too much trouble, Broly’s quick adaption and a mountain-knocking blow made him think otherwise.

Enter Goku. This is where the music gets real good. In the background, an announcer calls out Kakarot (Goku) versus Broly. Goku warms up for the battle, and Broly roars in the icy wasteland. Of course, Broly’s controlling father wants to stop the battle, but little does he know, his son’s control device was destroyed. And just like that, one of the movie’s defining moments begins. Seriously, look up “Goku vs. Broly” on YouTube if you haven’t seen it. It put a smile on a lot of viewers’ faces.

However, just because this was a defining moment doesn’t mean Goku comes out on top. In fact, he does worse than Vegeta. Goku is quickly forced to turn Super Saiyan and then Super Saiyan God. With a showcase of his martial arts skills, Goku is able to pause Broly’s rampage with a new move just long enough for a speech about Broly’s morality.

Then the music gets ominous. Broly turns Goku’s move against him, but Goku breaks out and judo flips Broly so hard he breaks the entirety of the landscape. After that, Broly pulls a Hulk and continuously smashes Goku into the ground until he almost passes out from the pain.

Staggering, Goku gets up and tries to transform into Ultra Instinct, but fails and transforms into Super Saiyan Blue, or Super Saiyan God, as he tries to fight Broly. Goku can’t hold his own for too long, so he calls in Vegeta, whose Saiyan armor is fully intact. After a short battle scene and a final Kamehameha—the Final Flash and Kamehameha combined—Goku and Vegeta, now with destroyed armor, Instant Transmission away from the battlefield to find a way to defeat Broly.

In the meantime, Broly is left to fight Frieza and, pretty comically, Frieza gets bodied. He tries to turn the tide on Broly by turning into Golden Frieza, but even that is met with a swift thrashing. Correction: It isn’t swift because it takes Goku and Vegeta an hour to get their fusion right. Whis steps in to take Broly’s attention away from Freiza as an act of pity and, soon after, Gogeta arrives.

This part is fun. Broly gets little to no hits in, but he’s rampaging like crazy. Gogeta isn’t stunting him, though. His base form is taking care of the situation, but because he wants to be flashy, Gogeta goes Super Saiyan. With a collision of a Kamehameha from Gogeta and a full power energy wave from Broly, the universe breaks, shattering to show a glistening cataclysm of neon blues and reds in a crystalline structure. It was all over for Broly when Gogeta went Super Saiyan Blue, though.

You thought Broly couldn’t hit Gogeta before? Think again. Blast after blast, hit after hit, Gogeta returns the thrashing he took as Vegeta and Goku to Broly in kind hundredfold. Broly is knocked so hard he vomits energy. Continuing his volley, Gogeta even throws his strongest weapon—the Stardust Breaker, a ball of pure, shimmering energy. Just as the final blow lands, Broly’s saviors whisk Broly away using the Dragon Balls. With the threat gone and the climax resolved, the movie moves to a resolution, with Goku visiting Broly off-world and making a pact to fight again one day, not as enemies but rivals.

So, all in all, the movie gets an A. The top five reasons for watching this movie are: 1. great fights, 2. great story-telling, 3. a canon version of Broly, 4. a canon Gogeta, and 5. the mixed-in humor.

Previous Preview: Hackathon searches for community solutions
Next Amazon: Is it worth it?