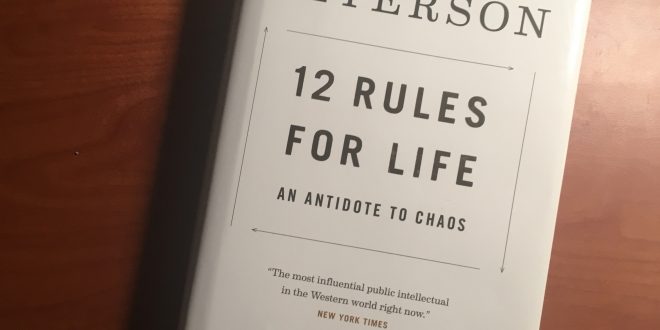 Chances are, if you’ve heard the name Jordan Peterson, it wasn’t in a positive context.

The Canadian clinical-psychologist-turned-inadvertent-political-icon was thrust into the speculative spotlight after speaking out against an amendment to Canadian Bill C-16, an amendment which, in his eyes, limited the right to free speech.

It was about this time as well that he released 12 Rules for Life: An Antidote to Chaos, a haunting, all-too-true view of the human condition and ultimately a force for good in a world enamored by suffering.

When regarding this book, it is important to consider what exactly Peterson is trying to say. Many writers who reviewed the book, on massive mainstream media outlets wrought with political pressure, failed to see the “big picture” as it were. They resolved instead to not read past the prologue, flip through the pages to find the hottest buzz words (socialism, Columbine Massacre, Holocaust) and trap themselves in the dogmas of religion.

In other words, they didn’t read the book.

Even if they had placed their eyes on every word of every page of the book, those who spouted Ad Hominem from their keyboards have hilariously proven Dr. Peterson’s very point.

This is not to say that Dr. Peterson is infallible, and I am less inclined to agree with him on some points. It is not even to say that he is a perfect embodiment of the rules which he suggests.

To suggest otherwise would be counter to Dr. Peterson’s argument as well.

Establishing Peterson wrongly as an icon or emblem under which to rally would spit in the face of everything this book addresses.

Dr. Peterson’s point boils down to this: The world is suffering, there’s plenty of it, but if you take personal responsibility, ask yourself “What can I do to alleviate that suffering?”, and remain humble and learn all you can, you will contribute to a higher good, and a personal one at that.

He argues for reason, individualism and confidence in a time where he believes the atrocities of the twentieth century cried out for their necessity more than ever.
I found myself wondering frequently, however, who specifically this book is targeted towards.

The simple answer: everyone. It is a book of the human race.

Peterson, as a student of Jung, is conscious of the powerful archetypes which pump like veins through the fabric of our society. The myths and religious fables of the world Peterson sees as infinitely valuable.

They are products of millennia of human experience, the closest we can get to perceiving, physically, the collective consciousness of the human race.
Peterson encourages all denizens of humanity to shoulder the burden on their suffering, atone for the “sins” of the past (or as he characterizes sin, failure to make the mark) and continue in a righteous manner toward the future.

It’s nothing new, to be sure, but that’s precisely the point. At a time where we are frothing at the mouth with the thought of progress and hold tradition as borderline contemptible, perhaps we need a reminder of where exactly our roots lie.

The book is admittedly a bit drawn out. Although poignant, Peterson’s rhetoric can sometimes come across as repetitive and can cause it to lose some meaning. He can frequently go off on marginally related tangents, although they mostly tie back to his main point.

12 Rules for Life was meant to be a more condensed and applicable version of Peterson’s 1999 text Maps of Meaning: The Architecture of Belief, a largely psychological and semantic work.
In this way, I would say Peterson succeeds in supplying the wisdom of ancient consciousness to modern humanity and imbues it with an applicable foundation to daily life, but some concepts might be difficult to understand to those without some background in psychology or religion.