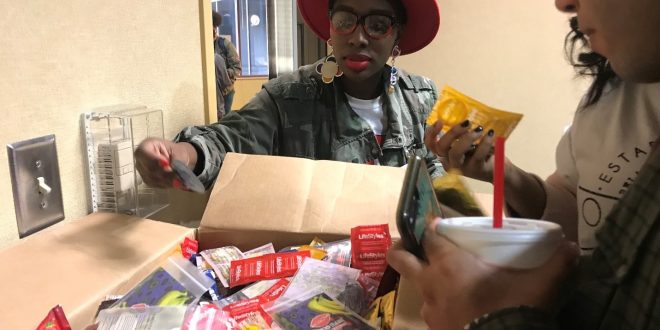 For some reason, whether you’re an awkward 14-year-old being tortured with a lecture about the “birds and bees” from your parents or you’re 30 and trying to communicate with your partner about your likes and dislikes, sex is plain uncomfortable to talk about.

It’s quite unfortunate because what people don’t really think about is how impactful sex really is. One slip up and you’re nursing a baby for nine months and have an extra 18 years’ worth of doctor, dental, food, clothing and other related bills.

Even worse, you could develop a disease that, at best, causes unnecessary discomfort and trips to the doctor. At worst, you have a debilitating condition that will stay with you for life and eventually kill you.

The Theta Zeta Chapter of Sigma Lambda Gamma recognizes the importance of having an open dialogue about sex, especially for VSU students, and hosted its second annual Sex Talk forum on Feb 13.

The three main discussion topics were STDs, VSU community statistics and how to practice safe sex. For presenter Gabriel Randolph, the rehash of the information does not diminish its importance.

“We’ve heard it all before,” he said. “We get this talk a million times. It should be common sense at this point. If it really was, there would be no cases of unplanned pregnancies. No one would ever get an STD again.”

Randolph proved to be right when the general audience at the seminar didn’t know how to properly put on a condom.

At the beginning of the presentation, the Theta Zeta women came up with a game and prize for a free Chick-Fil-A dinner. The object of the game was to place a condom on a banana, the quintessential demonstration in every sexual education class.

The winner only applied it somewhat correctly.

For a male condom to be applied correctly, there has to a bit of room left at the outer tip to prevent breakage. This is called a reservoir. The rest of the condom must fit snugly on the penis. The best way to accomplish this is to simply pinch the top of the reservoir and slip it on.

This extra space safely stores the semen and prevents leaks. Without this room, the condom likely breaks under pressure from the sudden ejection and could lead to pregnancy or infection.

Given how the participants fared, this is a common mistake.

Another sign that the condom topic wasn’t necessarily common sense to the audience was the sheer shock and surprise at the concept of the female condom. The shudder at its mere existence indicates most of them would not know how to properly put one in.

“Much like a tampon, you must put yourself in a comfortable position to insert it, like putting one leg on a chair,” Randolph said. “Then you squeeze the outer ridges of it and work to insert it into the vagina until you reach the end of the cervix. Easy once you get it.”

The next item on the agenda was STDs, the most common among them being chlamydia, syphilis and gonorrhea.

Aside from the typical sex ed spiel about the different sexually transmitted diseases and their symptoms, Theta Zeta presented some new and interesting information regarding the Valdosta area. Namely, that Valdosta is ranked 87 out of the top 100 cities in America with the most STDs.

Valdosta has 879 people afflicted with an STD per every 100,000 people, and the city has a confirmed 1,008 people currently diagnosed with one. That’s just the people who are aware of it. As Randolph pointed out, these diseases can be asymptomatic for up to a year.

“That’s why we’re making this an annual thing,” he said. “We want this to be uncomfortable. We want this to be a sort of wake-up call that you should not be playing games with your body. We go into detail about the condoms and the STD rates because sparking that dialogue erases the stigma that leads to people being ignorant about safe sex practices.”

After the main discussion was over, Theta Zeta retrieved multiple boxes of condoms and encouraged the audience to take as many as necessary. Then, free HIV testing was administered by Althea Daniels, M.D. and other medical staff of the university.