Home / Sports / No. 9 Lady Blazers still a work in progress 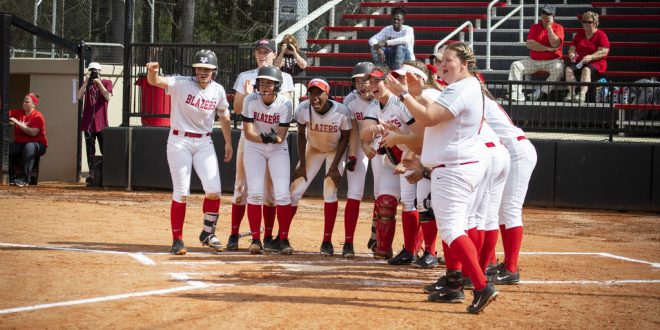 Blazer Softball has a sense of perseverance after falling at Mississipi College.

No. 9 Lady Blazers still a work in progress

Mississippi College got the best of the Lady Blazers softball team as VSU took back-to-back losses for the first time this season.

The Lady Blazers were rolling through the season with a 16-3 record before meeting MC. At 16-5, VSU dropped from No. 5 to No. 9 in the nation. Now, a sense of perseverance is radiating through the ball club.

“With as well as we were doing, the two losses could either make or break us,” catcher Lacey Crandall said. “As a team, we unanimously decided that we weren’t going to let it break us. There’s a completely different energy at practice this week than there has been before playing Mississippi College.”

That road trip to Mississippi exposed some faults, but despite the poor showing on both sides of the ball, talent isn’t the issue.

The area that may need the most improvement is team chemistry. There are only seven returning players this season. The rest are new.

Since the Lady Blazers’ first game in February, the team seemed to be bending the learning curve that comes with a new team.

But after the upset from MC, the team showed that its still new and the chemistry is still a work in progress.

“Being that we have an all-new team, a lot of the [players] haven’t completely gelled together,” transfer Taylor Strickland said. “But when we start gelling together, I think we have a lot of potential and we can go pretty far.”

VSU is already a top team with one of the best pitching staffs in the nation, so opposing teams should be frightened to hear that it’s not at full potential yet.

With half of the season remaining, the Lady Blazers have plenty of time to gel before they start postseason play in May.

But that’s the future. Now, VSU is about to face yet another test that’ll show what they’re truly made of.

The Lady Blazers will host No. 2 West Florida with a doubleheader on March 16 and another game on March 17.

West Florida is 25-3 on the year. But this isn’t the first time VSU has faced a top-ranked team.

The weekend against West Florida will be a heavyweight matchup, and VSU has the chance to make a lasting impression.