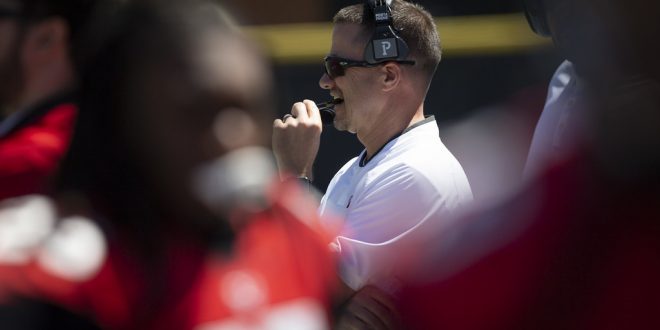 The Blazers will have their home opener Sept. 14 against Ohio Dominican on ESPN+, starting at 6 p.m.

VSU opened their title defense by battering the Albany State Golden Rams by a score of 38-3 Saturday night.

The Blazers, who start the season as the no. 1 team in the country, set the tone early in the game, going up 14-0 in the first four drives of the game. They were efficient on the offensive side of the ball, and opportunistic on defense, forcing two first half interceptions.

Redshirt junior defensive back Cory Roberts set the tone early, getting an interception on Albany State’s second drive of the game. The defense held Albany State’s quarterback Kelias Williams to a -3.9 quarterback rating in the first half.

“Everybody ran to the ball and played with a sense of urgency that allowed us to make plays,” Roberts said. “I was able to make a read my keys and make a play on the ball, and it was nice to set the tone and play with that kind of energy.”

The defense was overwhelming, particularly in the first half. The Golden Rams had only 240 total yards of offense, and VSU head coach Gary Goff gave credit to the defense for slowing a “young, talented Albany State team.”

“Anytime you’re playing a triple option team, particularly on the first game of the season, you have a lot of concerns,” Coach Goff said. “Our guys don’t see (that offense) in practice, and when you start getting that pregame scouting ready, it’s hard to simulate triple option at full speed in practice. So I’m very happy with how the defense performed tonight.”

Going into the season, Goff was a preacher of discipline and eliminating mental mistakes. He told me before the game his goals were to win the turnover battle and limit penalties.

The offense was very efficient and in sync, and didn’t turn over the ball once. Junior quarterback Rogan Wells was happy with the offense overall. He threw for 207 yards on 21 of 24 completions, with two touchdowns. He also ran for 50 yards on the ground.

“We came out really fast, something coach was preaching all off season, and everyone did a fantastic job of doing their job,” Wells said. “The first couple of drives were really clicking and playing at the pace we wanted.”

Overall, VSU has to be happy with continuing 2019 how 2018 ended, with a win. They were able to prove that the pressures of being no. 1 wouldn’t deter them this season, even with a new head coach.

“It feels good to get a win there’s no question about that,” Goff said. “It feels good because I haven’t been on the field these guys in a game situation. We’re going to enjoy this win. But come tomorrow, it’s a new week as we focus on Ohio Dominican.”

VSU will continue next week with their home opener against Ohio Dominican, who was just outside the top 25 in the initial rankings, receiving seven votes.

“Ohio Dominican is a really good team, I’ve played them a bunch of times and they’re almost always ranked,” Goff said. “We can still improve a whole lot, and that’s what scary for some people. If we keep working really well, we’ve got a great chance to be as good as we want to be.”