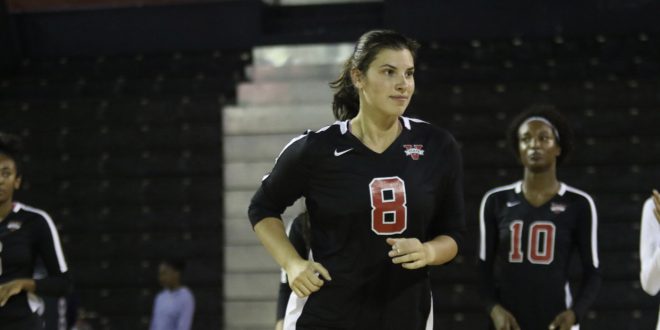 The Women’s Volleyball team opens the 2019 home slate against Albany State today at 6 p.m. at The Complex.

Albany State has a record of 2-4 and has dropped their past four matches at a tournament hosted by Augusta University.

Over the weekend, the Blazers competed in the Nova Southeastern Shark II Invitational, bagging three wins to make their record 4-4.

Some familiar faces like Kayla Widera and Tammy Reyes Perez put up big numbers to help seal the win for the team.

In their first game against the Sharks, Kayla Widera set a school record of 19 blocks in a 3-1 win, making Gulf South Conference history with the second-most blocks in a match.

The Blazers blew out Belmont Abbey, scoring more than sixpoints in each set. They also went up against New Hampshireand fought back from a 2-1 for a 25-23 win in the fourth set.

Thanks to their performance in the game, Kayla Widera and Dariah Powell were named to the NSU Shark II Invitational All-Tournament Team.

Dariah Powell leads the team in points and kills with 76 kills and 88 points. She also has hitting average of .196 in 245 attempts.

Jessica Mooney is second at 63 kills.

Tammy Reyes Perez leads the team in assists with 236. Perez and Katie Demo both lead the team in aces. Both have five aces each.

Widera has a team high in blocks with 48 total, 44 of which were assisted, four solo. Junior Rebecca Sills leads the team in digs with 114 total.

Last season, the Blazers they defeated Albany State 3-0. The Blazers have 308 kills this season and an average of .186 in 942 attacks.

Previous Don’t be another statistic: CRASE prepares students for the worst
Next Georgia’s 50 safest cities: Valdosta not in the lineup