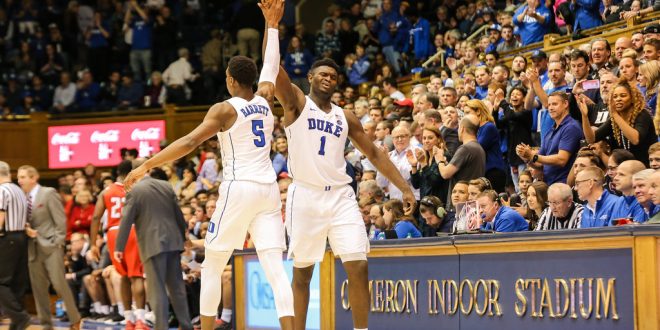 RJ Barrett (5) and Zion Williamson (1) celebrate. Both are now NBA rookies after one year at Duke University.

The NCAA is trying to use its get-out-of-jail-free card.

Over the years, the topic of pay to play has been one of the most controversial and often discussed stories that surrounds college sports. Now, after bills were proposed in many states to put the practice in place legally, the NCAA has ruled that it will allow college athletes to profit off of their own name and likeness “in a manner consistent of the collegiate model.”

While it remains to be seen what the “collegiate model” entails (knowing the NCAA, we’ll all be unhappy with the response), it’s a step in the right direction. They are now following the actions pushed upon them by many states.

California was the first state to pass such a law, The Fair Pay to Play Act, allowing athletes to profit off of their own name. This includes the opportunity to profit off of merchandise, selling their name or likeness for video games and other memorbilia and selling their game used products. Since California’s bill, Florida and New York have followed suit with bills of their own, and as many as 11 states have prepared bills.

Change is coming in a whirlwind, and the NCAA is now trying to jump back out in front of it.

The NCAA has constantly been pushing back on the idea, citing reasons of competitive imbalance in the league and an unfair advantage to certain schools. The organization also cites the fear of players being taken advantage of by agents and boosters in unfair deals.

For the NCAA’s argument of protecting the players, most of this is already happening under the table.

Boosters are supplying cash for top recruits, and it seems less likely that players would be taken advantage of by boosters if the money is above table, with an NCAA Players Association backing the individuals.

Protecting the players is a weak argument to be had.

But the argument to pay players still isn’t over. The statement offered from the NCAA on passing the ruling still has a lot of uncertainty. This seems like more of a publicity stunt than anything of actual merrit. Jay Bilas, an ESPN analyst on college basketball, isn’t buying the rule change.

“What they’re really trying to do is stall both state and federal legislation from going forward so that they can put something in place that really doesn’t do anything. It appears to do something, but doesn’t really do anything; so they can get Congress off their backs,” ESPN college basketball analyst Jay Bilas said on the “Golic and Wingo” ESPN Radio show. “The NCAA called Congress and asked the two representatives—one being Mark Walker from North Carolina—to pull their legislation, and their response was no.”

Bilas, a former basketball player at Duke University, has long been a proponent of paying student athletes. The NCAA is sending everyone through the runaround, missing their perfect opportunity to adapt to avoid battling Congress.

Here are the major reasons that the NCAA should allow college athletes to make money off of their names.

Players who deserve to be paid, will get paid.

The biggest debate to the fair pay arguments was the question of how the NCAA would balance the money. Would there be a salary cap, so teams such as Alabama can’t buy all of the best players? Who is deciding who makes the money? Is income based on value to the school or value to the team?

These factors made fair pay a slippery slope the NCAA carefully avoided for a long time. Now, the new ruling takes a lot of responsibility out of the committee’s hands.

Players will now be their own entrepreneurs, making their own deals and being able to generate their own income fairly. The only stipulation the NCAA listed was that any profit must stay “consistent with the collegiate model.”

The way this decision works out is if players become savvy business people, learning how to profit off of their own talents.

The top players who drive substantial income to the universities (the best players and biggest names in their respective sports) will now be able to earn what they feel they deserve, and many of them will profit.

Duke basketball star and NBA No. 1 draft pick Zion Williamson would’ve been a seven-figure athlete while in college, for example, if he were able to profit off of his own image.

The biggest task of the NCAA will be to keep the competitive balance, which is something the organization highlighted in its press release.

New rules are constantly taken advantage of, and if players have a way to profit more off of going to the top five schools, they’re going to take advantage of that opportunity. The NCAA will have to ensure that other schools aren’t falling behind due to the ruling.

The NCAA can look to other professional leagues to how this will look. Obviously the concern is that Alabama and Clemson in football, and Duke and Kentucky in basketball, will have sponsors pay all of their players and win every championship. I disagree.

Most of these teams are already paying student athletes. Nike and Adidas has a major scandal where they’re funneling money to schools to pay for college basketball recruits. The idea that this will be new money to spend doesn’t make a lot of sense. The money is already there and will just be aboveboard now.

NCAA no longer has to punish schools for minor monetary exchanges

In 2010, University of Georgia wide receiver A.J. Green was suspended for four games for selling his game-worn jersey for $1,000.

While, depending on how the NCAA institutes the pay to play rules “in a collegiate manner” as they described, the fact is we don’t have to worry about the top athletes missing games, or missing seasons, for minor cash exchanges and memorbilia sales.

Allow the players to entrepeneur themselves like any other student on campus has the right to do. It is the fair way.

Once again, this is a situation where all parties feel like they can walk away with a victory. For the players, it is a great step toward what they feel is fair compensation for their worth on the field.

Many players will rejoice at the opportunity to profit off of themselves, and it is a model that still promotes what college is all about: growing one’s self.

Teaching these kids to grow their brand at 18 years-old can go a long way to helping that down the line, especially when some of the student athletes reach a professional level, they’ll have the ability to understand their self worth, and avoid being taken advantage of without the NCAA having their back.

It was a monumental decision for the NCAA to allow college athletes to profit off of their own likeness. As more information unfolds into the rule changes and how it will be installed into the game, we’ll see a plan in place that will protect the players, while still allowing them to feel as though it’s them, and not their universities, that reap the benefits of their hard work on the field.