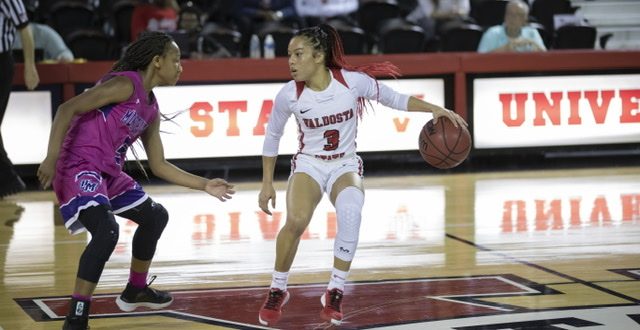 When taking on the Falcons, the Lady Blazers knew they had to attack the paint.

VSU won against Montevallo 97-87 Thursday night as junior Kayla Bonilla finished the game with the accomplishment of scoring her 1,000th career point during the fourth quarter.

Bonilla and Cheray Saunders helped lead the way as the Lady Blazers took a first quarter lead, but Montevallo kept in it and it was 38-38 going into the half. Bonilla and Saunders were a combined 7 for 18 in the first half.

The team fell down in the beginning of the first quarter, but Coach Deandra Schirmer said the bench helped improve their performance.

“I really thought our bench provided a spark the entire game,” Schirmer said. “We had subs come in, we had 25 points off our bench tonight. Kendall Bolmer came in and gave us some big three-pointers. Abby Rouse came in and was shooting well so I really think our bench came in and was able to give us the lift that we needed.”

The Lady Blazers had a lot of turnovers in the beginning. Montevallo managed to disrupt the offense by continuing to generate steals, but VSU were prepared.

“At one point Motevallo was leading the conference in steals so they’re a team where that’s kind of what they do, that’s kind of their style,” Schirmer said. “We’ve been working on keeping our composure, even when we turn the ball over we got to make sure we stay locked in and not get too rattled by anything they’re throwing at us because we knew that they’re a great team, they have a great coach and that they were going to keep coming at us.”

After the offense composed themselves, the defense stepped up. Montevallo had a field goal percentage of 50 percent in the first quarter, but it went down to 31.3 percent in the second quarter as VSU forced Montevallo into difficult shots.

Third quarter was a big momentum shift for the Lady Blazers when they took a ten-point lead. They were able to shoot 4-11 three pointers to take the lead.

In the fourth quarter the Lady Blazers started on a 12-4 run, and held a good lead, even as Montevallo started battling back at the end.

“I told our players we had some quick fouls I wasn’t happy about,” Schirmer said. “We have to settle in and we have to be able to defend without fouling. We knew they were going to take a lot of threes because it had to come in at some point and I said, when they take those three-pointers we have to get that rebound so that they don’t get the second chance points.”

VSU got the crucial win against a team ahead of them in the Gulf South Conference standings. They’re now 17-8 and look to continue their winning ways on senior night, as they’ll take on West Alabama at 2 p.m.

Bonilla closed out the game for VSU and got her 1,000th career point late in the fourth quarter. She struggled from the three-point line and attacked the basket relentlessly.