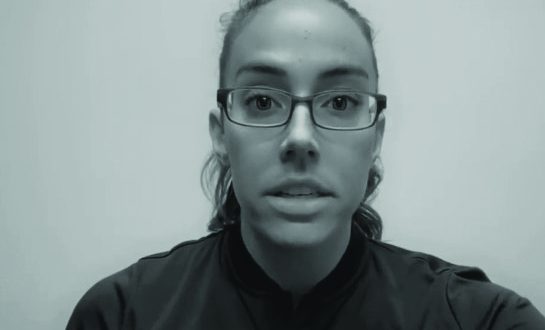 “This summer, our players and staff came together to discuss the racial and social issues in our country,” Schirmer said. “The group wanted to show unity regarding the topic and decided that a video would be a great way to do that.”

The video is black and white throughout and begins with each player on camera saying the name of one of the victims. The victims’ pictures are shown and a player describes his or her last words or actions before they were killed.

After the victims are named and honored, Schirmer appears on screen and delivers the team’s message.

“Our program recognizes and stands against all forms of racial oppression and injustice. We are proud to have a diverse team and we stand together in this fight for change. We challenge everyone to stand with us and join in the fight for change.”

In closing, the players featured in the video, specifically players of color, repeat the phrase, “Am I next?” before the screen cuts to black and the music fades out.

Only a few players are seen and heard throughout the video, but, according to Schirmer, all returning players and coaches contributed and participated.

Students were mostly supportive of the statement made by the Lady Blazers.

“I think it’s a great thing—what sports are doing with making statements on racial issues,” Nick Flatt, a senior religious studies major, said. “Now, with the racial issues that have been circulating, they are using the power that they have in bringing people together to start a conversation about the racial issues that are very prevalent in our culture today.”

Other students were critical of some of the points presented in the video.

Previous Kamala Harris may break barriers this upcoming election
Next People Poll: Do you think VSU should have started the semester face-to-face?