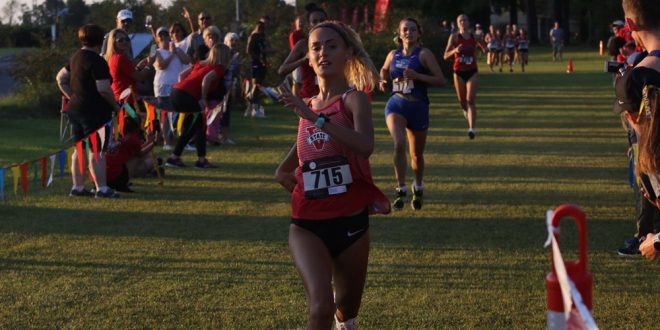 On Saturday, Oct. 31, the VSU men and women’s cross country teams traveled to Huntsville, Alabama, and capped off their season with several members setting personal records, and senior Angie Cipriani setting the new school record for the 5K.

Cipriani, a senior, was the first Lady Blazer to cross the finish line and finished with a time of 18:09.09 her new personal record, earning eighth place overall and a spot in VSU history as the new school record-holder for the fastest time in the 5K race. Cipriani earned First Team All-Conference honors.

“Honestly, I didn’t think I was going to even come near the school record,” she said. “I’ve struggled a lot this season with self-doubt and it’s really taken a toll on me. This race I really just went in with the mindset of beating people—I wasn’t really worried about the time.”

“Training for the championship was one of the most challenging things I’ve ever had to go through—not just physically either. The workouts we were doing the week before were extremely intense,” she said.

Junior Samantha Murray earned Second Team All-Conference honors and placed 16th overall with a time of 18:53.53, her new personal best. Murray now holds one of the top five fastest times for the 5K at VSU.

Senior Olivia finished the last race of her career as a Lady Blazer with a time of 20:21 in the 5K, her best time to date.

“I did expect to run a personal best,” Rosener said. “I have been training and running faster in practices than I have ever before. This whole time I have had what it takes to run as fast as I did. The only thing that was stopping me was my own mental state by telling myself during races that I can’t do it. This race, the team unleashed a lot of potential that we had and showed this conference that they better watch out, because that’s just the start of what VSU’s Lady Blazers can do.”

Rosener decided not to focus on the fact that this race would be her last one as a Lady Blazer, but instead, she wanted to push herself and do the best she could for her team.

“I was nervous about this race being my last collegiate race, but it wasn’t the last race I would ever run, so instead of focusing on this race being the end, I focused on running the best that I could for my team. Of course, I cried after the race was over, but I didn’t cry because I was sad, I cried because I was so incredibly proud of how we competed in that race. All of the ladies put their best foot forward. Most ladies PR’d, and if they didn’t, they were really close to it.”

Senior Kayle Smith finished her career at VSU with her best time to date.

The Lady Blazers finished sixth overall with an average time of 19:33, the team’s fastest average of the year.

The men’s team finished with an average time of 26:25—the fastest time for the men’s team since 1982—earning sixth place overall as well. The University of Alabama in Huntsville placed first.

Junior Brishen House was the first runner from VSU to cross the finish line. He finished with a time of 25:10.54, his new personal record, and finished 16th overall. House earned Second Team All-conference honors—a feat that hasn’t been accomplished by a VSU men’s team runner since 2014.

Sophomore Logan Kraus now holds the third-fastest time in the 8K at VSU with a time of 26:00.01.

Senior Nick Flatt finished with a time of 26:10.75, ranking among the top five times in the 8K at VSU for the day.

“There’s a lot more pressure [at the GSC meet],” he said. “You’re not racing for time, but place, so we knew what guys from other teams we had to aim to beat. It was a good culmination of a lot of solid work since about April of this year. ”

Flatt is encouraged by the team’s performance in Huntsville on Saturday and is hopeful for the team’s future as they continue working to improve.

“It’s very motivating because our main goal was top five and we got sixth. Even though we’ve improved a lot as a team, and we are proud of the direction this program is heading, we know we can’t get comfortable,” he said.

Both teams finished one spot higher than the GSC preseason poll predicted.

Previous The Spectator “Office” 2020
Next A Guide to Voting