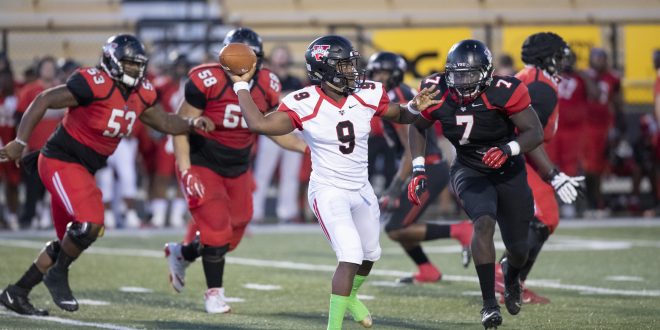 The Valdosta State football team is prepping for what will be a one-of-a-kind scrimmage game at Bazemore-Hyder Stadium on Nov. 14 at 2 p.m.

The scrimmage will be unlike any other in recent memory as VSU, along with the rest of the country, continues to deal with the ongoing coronavirus pandemic.  Normally, VSU’s football team would be heading into the final stretch of the regular season , but due to all fall sports being postponed until the spring, this is the first time the team will get to take the field this year.

According to the athletic department, fans will be permitted to attend the game with no more than 1500 people allowed in the stadium and will be required to wear masks while inside the stadium.

The football team is looking to build on what has been a remarkable run over the past two seasons, one that has included two undefeated seasons and a national title in 2018.  While there won’t be a national title to compete for this season, the team is still looking to continue their success as everything slowly starts returning to a level of normalcy in 2021.

As for the scrimmage, there will be some interesting game plans in store, according to Head Coach Gary Goff.

“It’s going to be Red vs. Black—first team versus second team,” Goff said. “We are considering spotting the second team 14 points and having to let the first team try to come back and win the game.  We are also having an accelerated clock in first and third quarters and a normal clock in the second and fourth quarters, with timeouts during each quarter for the Red Hots to perform.”

Goff said that the players are all eager to go out and play in some live action for the first time this year.

According to Goff, there are some position battles that could be decided on Saturday, the most notable of which is kicker, with three players vying for the starting job. Apart from that, Goff is mainly interested in execution.

Despite all of the uncertainties that 2020 has brought, Goff says at least one thing is for certain about the scrimmage.

“One thing I can guarantee is that VSU will win on Saturday,” he said.

Previous Among Us: Tips on how to be the best play ever!
Next “Blaze the Ballot” turns into “coping with COVID”