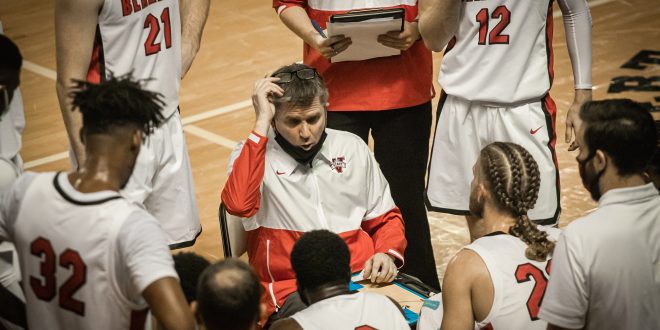 Helfer said there were a few symptoms he experienced, one being exhaustion.

“By 5 p.m, every day, I was wiped out,” Helfer said. “Just physically exhausted and just completely out for the rest of the day.”

Coach Helfer has fully recovered, and has been completely cleared to coach and continue to lead the team for the remainder of the season. For this season, however, things are far from being back to normal.

There has been no shortage of precautions taken by VSU to protect the team and the fans at the games. Provisions like requiring masks, social distancing and a new capacity limit are being enforced to ensure the best possible outcome.

Coach Helfer is supportive of the decision not to cancel the season despite the surge in COVID-19 cases.

“If we can do it safely, I think we should,” Helfer said. “If anything, just to have some sort of normalcy again.”

For the players like Cam Hamilton, a redshirt junior guard, this decision is one that has not been taken lightly. Hamilton says the players’ health has to come first for the sake of them being able to play the game.

With some teams being unable to play at all, Hamilton says he and his fellow teammates prioritize their health to continue playing this season.

The risks involved with traveling and playing basketball during a pandemic are obvious, but the Blazers are exemplifying their dedication to the sport this season.

“We have guys willing to sacrifice and come out here no matter what the situation in the world is for the game,” Hamilton said.

Hamilton said that he feels very confident and comfortable playing at VSU thanks to the administration’s dedication to, not only the players on the team, but the fans as well.

Despite firsthand experiences with the virus itself, the men’s basketball team has been doing well this season, and the team has been prioritizing their health and each other.

According to coach Helfer, although the team lost practice time during the preseason, they have been working together both on and off the court.

“It has created unintended unity and I can see it on our guys during games because they are all trying to be there for each other.”

As the coaches and the players continue out this season, fans are encouraged to attend games and, as always, be safe.