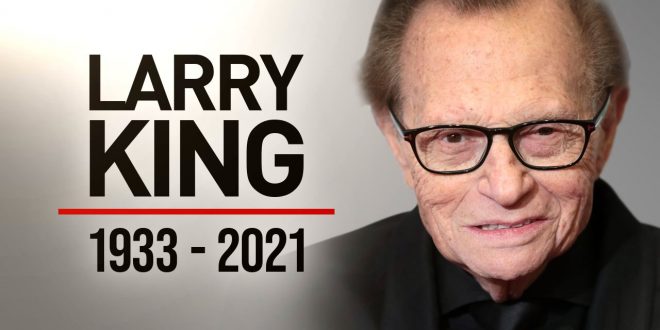 Larry King, an iconic television broadcaster most famous for his show on CNN, died on Jan 23.

King hosted “Larry King Live” on the television network CNN for over 25 years. He was best known for his unique way of interviewing his guests.

In 1978, King was hired by the radio network WIOD, where he started a nightly talk show called The Larry King Show.

The show quickly became successful and eventually ended up getting the attention of Ted Turner the founder of CNN.

Making a small revision to the show’s name, “Larry King Live” on CNN rode on the momentum that had already been built up by King at WIOD.

Throughout his time on CNN, King interviewed presidents, athletes, actors and even regular citizens.

King had ambitions of becoming a radio host starting at a young age.

According to a TIME interview, all he wanted to be was a broadcaster as early as age 5.

When King was 9 years old, he tragically lost his father due to complications of heart disease. This caused King to lose interest in his academics, and he began to work as a mail clerk to help his mother at home.

King then got the incredible opportunity of meeting with CBS that soon laid the groundwork to start his career in radio and talk show hosting.

The globally known talk show host is known for his non-confrontational way of interviewing his guests.

According to TIME, King likes to ask questions that give viewers a sense of who the guest is and how they impact the world.

This style of interviewing grew popular with his audience as well as his guests.

These days, many broadcasters on television take the time to ask their guests long and elaborate questions, in some cases hardly leaving the guest time to answer.

King believed that it was most important for him to learn something after each of his interviews, and that meant that he had to let his guest talk.

King told TIME that it’s more important to listen during an interview because otherwise you won’t learn much about the guest.

Another notable thing about King was that he took the time to interview regular people, not just those in the spotlight.

King would have a segment on his show called “Who Is the Guest?” In which he would have no idea the guest he’d be interviewing. Anyone from any sort of background could walk in, and all they’d have to tell King was their name.

Then, King would interview them for two hours asking the guest about who they were and what they do.

According to a Columbia Journalism Review King said during an interview that he likes to find how people react to situations such as war or how they feel about their work.

King went on to win the Peabody Award for ‘Excellence in broadcasting’ twice, inducted into the ‘Radio Hall of Fame,” and even starred as himself in movies.

Sources close to King and his family confirmed he had Covid-19 in December of 2020 but did not say whether it was the official cause of death.

King leaves behind an incredible legacy for the generations to come who choose to partake in broadcasting and journalism.

Previous Lady Blazers softball expects success in 2021
Next A Spectator guide to Trump Impeachment No. 2