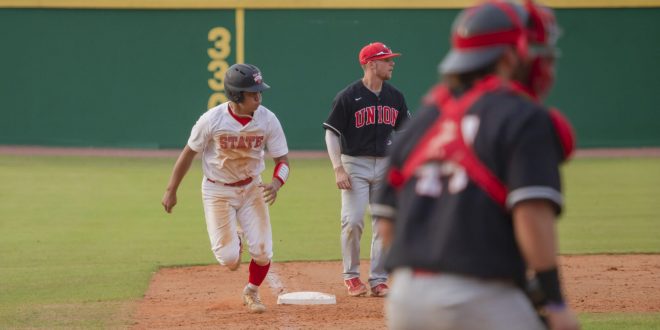 VSU lost the first game on Saturday in a pitcher’s duel, but over the next two games, the offense got hot for the Blazers. Twenty-five runs would cross home plate over the next sixteen innings.

VSU sophomore pitcher Elijah Gill was fanning batters left and right in game one, racking up 13 Ks in his seven innings of action. Gill’s 13 strikeouts are the most in a single game by any pitcher in the Gulf South Conference so far this season.

Head Coach Greg Guilliams raved about the sophomore’s pitching against the Bulldogs.

“I thought [Gill] threw exceptionally,” he said. “He attacked the strike zone, he had his fastball, he had his breaking ball…his changeup was really good. He also had a lot of velocity and was just beating the bats.”

Despite allowing only a single run, Gill left with a no-decision in the seventh inning after the offense went scoreless through the first eight.

VSU’s first run came when senior infielder/outfielder David Maberry found himself down to his last pitch before belting the game-tying solo shot to deep right field.

VSU couldn’t match the three runs scored by Union in the tenth inning and lost the game 4-2.

More great pitching from VSU in game two kept the game from ever getting too close, despite a sluggish start from the offense.

Runs were scarce in the first five innings as VSU was only able to turn four walks and three passed balls into three total runs. In the sixth, however, the bats finally caught up and the Blazers tacked on four runs and then another four in the eighth.

Union scored one run in the sixth off a walk and a double, but VSU’s great pitching held them at arm’s length until the barrage from VSU in the eighth brought the final score to 11-1 to end the game on a run rule.

Game three on Sunday would end in a similar fashion in the bottom of the eighth. VSU led most of the game with a cushion after a two-run second inning and three more in the fourth.

Union scored twice in the eighth inning to make it 4-5, but after a couple of pitching changes, VSU would escape intact.

VSU would come back in the next frame and hang nine runs on Union before the game was called. Maberry accounted for three runs when he cleared the bases with a double, and Jowernick Daantji hit a home run to score the final three runs of the game. The final score was 14-4 and the Blazers won the series 2-1.

VSU’s next game will be against the Georgia Southwestern Hurricanes on Tuesday, March 23, 2021, at home. The Canes, members of the Peach Belt Conference, currently have an 8-6 overall record, with one of their wins coming at the expense of the Blazers already this season.

In their last matchup the Blazers struggled to get anything going against GSW’s pitching in a 10-3 loss in Americus.

The focus should be on improving the defense. Three errors hurt VSU in the last game, and the pitching was off.

As the weekend rotation of Gill, Cone and senior pitcher Zach Blankenship get rest, Coach Guilliams insists it will once again be a group effort from the bullpen.

“That [the bullpen] has been a strength of the team,” Guilliams said. “I think our bullpen has been better than everybody we’ve played. Guys like [Jeremy] Adams and [Jakob] Barker and Henderson have been unbelievable and other guys have really contributed also.”

VSU will come into the game with a 13-6 overall record and a 12-5 record in Conference games.

While the game against GSW is a nonconference game, VSU is looking to come in on a winning streak when they face conference opponent West Georgia the following weekend.

After an eight-day break between games, Valdosta State will play GSW at home at Billy Grant Field on March 9, 2021 with the first pitch set for 5 p.m.