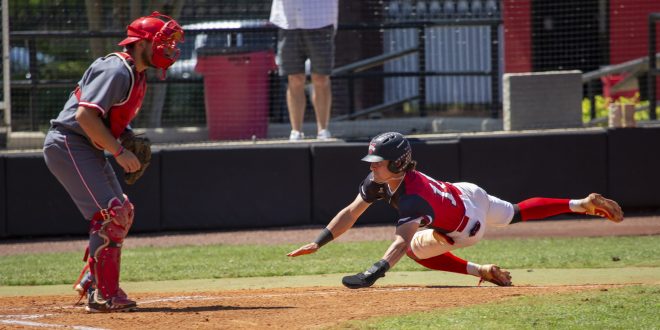 The VSU baseball team is set to take the mound against rival West Georgia in what will be a pivotal series for both teams.

The three-game series will be played this Sunday and Monday after being moved back due to inclement weather.  It will also be VSU’s last series of home games of the regular season after their April 21 matchup against Flagler was canceled due to Flagler needing to make up conference games.

VSU (17-12, 15-11 Gulf South Conference) enters the series on a three-game winning streak, sweeping West Alabama in their last outing. The sweep snapped a six-game losing streak that dropped VSU out of the national rankings.

Despite the recent losing streak, head coach Greg Guilliams is proud of the team’s perseverance to battle back.

“I don’t think the guys ever lost confidence,” Guilliams said. “This season has been unusual in that we’ve had a lot of streaks—we’d win six and then lose six. A lot of the games we had played in [during the losing streak] were close. We just made a few mistakes in those games that costed us, and the guys know that.”

While dropping the series wouldn’t end their postseason hopes, it would significantly lower VSU’s chances of playing in the NCAA Division II South Regional next month.

“The players know what’s at stake, not only this week, but the rest of the season,” Guilliams said. “I’m not putting any more pressure on them than what is already on them. The players are going to go out and give it their best.”

West Georgia, despite their losing record, is one of the most dangerous teams in the GSC. West Georgia leads the GSC in stolen bases this season with 53.

West Georgia is led by one of the best hitters in all of Division II baseball: Dan Oberst. Oberst is batting a .405 average this season and is tied for second nationally in home runs with 14.